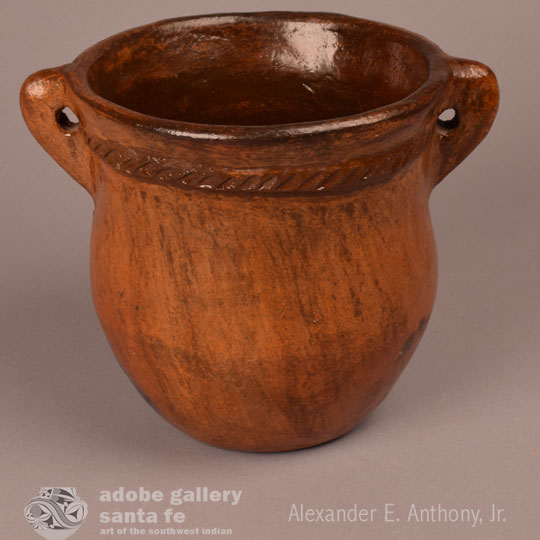 This is a traditional Navajo pottery jar made by Diné artist Mary Lou Davis in the manner of those made for the past 100 years or more.  It is thick walled with a flat bottom and two handles. There is a rope of clay just below the rim that serves as the sole decoration.  In the traditional manner, the jar is not signed with the name of the potter.

The Diné have traditionally made pottery for their own use. Pottery drums and pipes were made for ceremonial use and cooking pots and coffee pots and cups made for daily use. It was not until after World War II, when traveling resumed and highway construction commenced on the Navajo Reservation, that pottery production increased. Prior to that, only three paved roads bordered the reservation and none crossed into it, therefore there were no incentives to produce something for sale when there were no buyers.

As tourists began visiting the reservation, there became a need for inexpensive items for them to purchase as souvenirs: items less expensive than jewelry or rugs. The traders encouraged the women to make pottery to fill this need. Thus, we have the creation of a new marketable item.

Mary Lou Davis and her mom, Kate Davis, are skilled potters.  Kate Davis learned pottery making as a child from her grandmother, Selena Williams.  She has followed the time-honored practices of the craft as taught by her grandmother.  Many of her vessels are used by Navajo for ceremonial functions. Mary Lou has also followed tradition in making pottery.  In this jar she limited the decoration to a rope-like band around the neck and included the traditional ceremonial line break at the handles.  There are a couple small fire clouds and the jar is coated in a finely placed piñon pitch film.

Provenance: Originally from the personal collection of Chuck and Jan Rosenak, collectors and authors of books on Navajo folk art, who purchased it directly from the potter. Now from the collection of the client to whom we sold it in 2013.