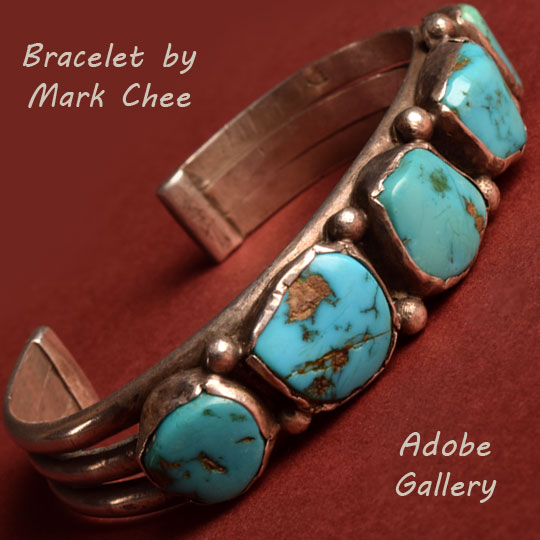 This Navajo sterling silver bracelet by Mark Chee is composed of three individual silver bars, flat on the bottom and domed on the top.  They are secured with silver bars at the bracelet ends.  There are five naturally-shaped Morenci turquoise cabs mounted in silver bezels across the top of the bracelet.  Between the gemstones are two silver drops.

The bracelet is stamped with Chee’s hallmark Thunderbird with his name over the bird’s body. His name is stamped as ChEE.  Additionally, there is a bearpaw impressed into the silver.  I have not determined the significance of that.

Mark Chee (1914-1981) “was born in Lukachukai, Arizona, and educated in the Indian school system.  By the age of twenty, he was working as a silversmith in Santa Fe for Julius Gans at Southwest Arts and Crafts.  Chee enlisted in the Army in 1942 and served in the Air Force (sic) during the war. Returning to Santa Fe in 1946, he married a woman from San Juan Pueblo where they made their home.

“It was reported in the Santa Fe New Mexican newspaper in 1958 that Chee made his own tools and only utilized the modern implements of torch, electric buffer, and silver saws.  He worked in all techniques of silverwork including overlay, inlay, and hand-stamping, but is best known for his very heavy-gauge bracelets set with high-quality turquoise stones.  His most recognized bracelets consist of either heavy solid bands with deep chisel work or split-shank cuffs with turquoise stones set between massive carinated bands.  Chee signed his work using a right-facing thunderbird with his last name in the body of the bird.  He worked into the late 1970s and passed away in August 1981 after a lengthy illness.”

Condition: very good condition with natural wear patterns.  One turquoise cab has what appears to be a natural crack, not one caused from damage.

Provenance: this Diné Silver and Bisbee Blue Turquoise Bracelet by Mark Chee is from the collection of a gentleman

Reference: all of the biographical information is courtesy of Reassessing Hallmarks of Native Southwest Jewelry—Artists, Traders, Guilds, and the Government by Pat Messier & Kim Messier, Schiffer Publishing, 2014:107

- Southwest Indian Silver from the Doneghy Collection by Louise Lincoln

- Indian Silver Jewelry of the Southwest 1868-1930 by Larry Frank and Millard J. Holbrook

- The Navajo and Pueblo Silversmiths by John Adair