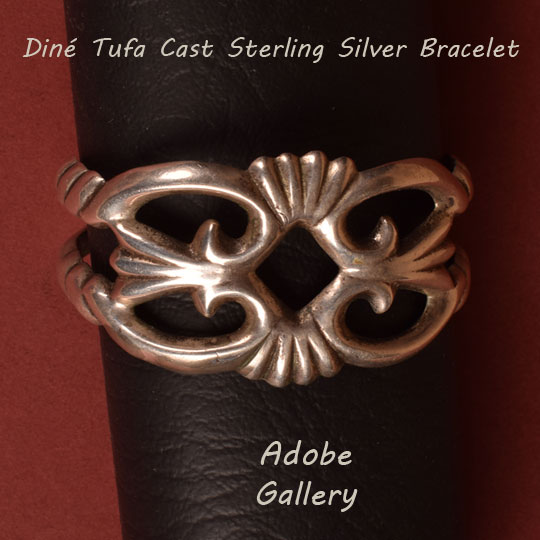 This silver bracelet was made in what is referred to as a traditional sand cast or tufa cast procedure.  Sand casting or Tufa casting are understood to be methods by which a jeweler pours molten silver in a pre-designed mold in a flat brick-like form.  The bracelet formed in this manner is cast in the flat position. After cooling for a period, the flat casting is removed from the mold and heated to a temperature which allows it to be shaped in a curved form.

This bracelet has four graceful curved lines with hooks at their ends,  The sides were carved to display twisted rope designs. The bracelet is light and delicate.

I think it appropriate to quote a paragraph from the book Indian Silver Volume Two by Dale Stuart King (p.19-20) which I think will clear up the use of the terms sand cast and tufa cast.  To quote “Here let me digress to state I vehemently dislike the term ‘sand cast,’ commonly used for hand-cast.  Indians in their casting do not use sand, such as molders’ sand. The nearest to it is the wet-concrete-and-oil mold which, it is said, is used by 90% of hand-casters today.  Historically, it was rock-casting. The Indian carved his negative design into one or two matching slabs of tuff. Not tufa, as it has been called by so many authors. It was usually pumiceous tuff, or perhaps fine-grained sandstone.”

Another author, John Adair in The Navajo and Pueblo Silversmiths, p 63 states ”This rock, which is erroneously called sandstone is tuff, a volcanic ash similar to pumice.”

It is not likely that these clarifications will at all change the long-standing use of the terms sand casting or tufa casting.

Provenance: from the collection of a resident of Santa Fe