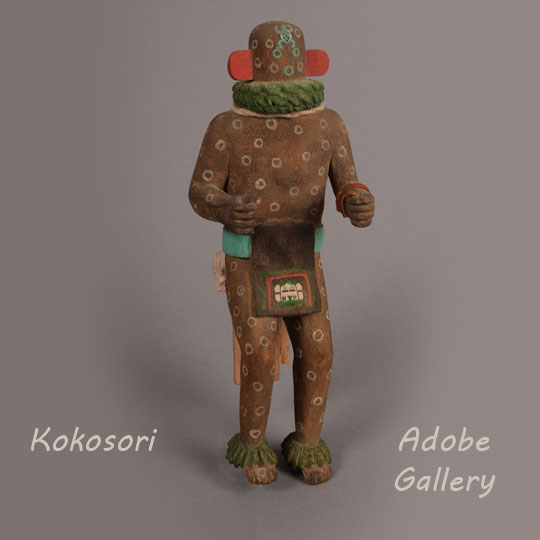 This all-wood, one-piece carving of the Hopi Pueblo Kokosori Katsina portrays him as he is in motion. He does not have anything in his hands. Kokosori can be represented in many functions and the specific function being portrayed can be identified by the items in his hands, but the carver did not place anything in the hands of this carving so we will not speculate as to the function being represented.

This carving of Kokosori wears a loincloth secured by a turquoise color belt, and a green ruff around his neck. He wears a simulated ketoh on his left wrist, and evergreen bough on his feet. Draped under his loincloth in the back is an embroidered Hopi sash. He has the look of innocence and wonderment. It is a charming doll.

"This small kachina, for he is always portrayed by a boy, is one of the oldest recorded kachinas for the Hopis, as Dr. Ten Broeck saw him in 1852 at First Mesa. He appears in other pueblos but is probably best known in Zuni where his name is Shulawitsi. It is this tie with Zuni that brings his appearance on First Mesa with other Zuni kachinas in the Pamuiti Ceremony described by Fewkes (1903:27)." The Zuni Shulawitsi is almost an exact duplicate of the Hopi Kokosori, but they are not related to each other.

"He (Kokosori) has on occasion appeared as a Barter Kachina also on First Mesa. On Second Mesa he bears the name of Kokoshoya and comes with the Chief Kachinas in their appearance after the story-telling of the Sikyaqőqőqolom (the Yellow Qőqőle) at Powamu. On Third Mesa the small figure of Kokosori is said to accompany Aholi and Eototo." (Wright,1973:20)

Condition: very good condition with a minor chip on his right thumb

Provenance: this One-piece Carving of the Hopi Pueblo Kokosori Katsina is from the extensive collection of a client from California