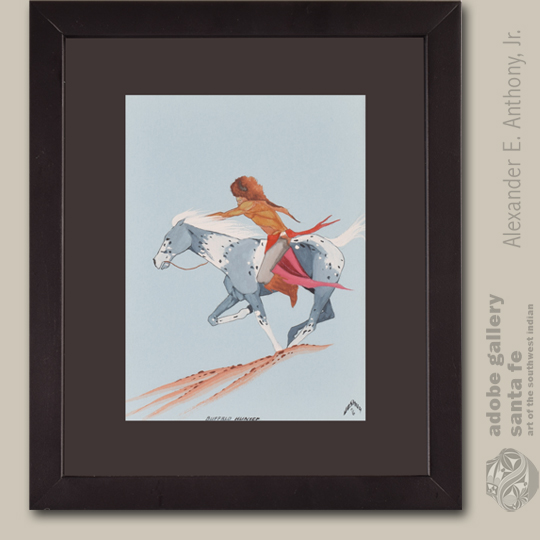 Lee Roy Joshua was a Creek / Seminole painter and printmaker who was born in Holdenville, OK in 1937.  His parents were Dorothy Tiger and Edmond Joshua, and his cousin was Jerome Tiger. Joshua’s older brother Edmond Jr. was also an accomplished painter.  He received an Indian School education. Patrick D. Lester’s The Biographical Directory of Native American Painters includes an excerpt from a show catalog that describes Joshua’s beginnings: “In 1967, when Jerome Tiger died, his mother expressed the wish that someone in the family would continue the work he had started, recording the Creek/Seminole culture.  This inspired Joshua to become serious about his own art work and pursue a career as a painter.”

Joshua received awards from many notable shows and institutions, including the Heard Museum Guild Indian Fair and Market. He was exhibited at the Philbrook Museum of Art,  the Gallup Inter-tribal Indian Ceremonials, All American Indian Days, the Oklahoma Historical Society Museum, the Trail of Tears Art Show at Oklahoma’s Cherokee National Museum, the Creek Indian Council House Museum, and the Seminole Nation Museum.  His history of exhibitions and awards suggests that he was most active in the late 60s and 70s. Joshua passed away in 2001.

“Buffalo Hunter” is a small but powerful watercolor painting that dates to 1976—during Joshua’s most productive period of creativity.  Joshua’s muscular Buffalo Hunter, pictured with his left arm out and over his horse’s neck, wears leggings and moccasins. His blue and white horse, pictured in stride and moving quickly downhill, is made of colors that complement the blue paper on which it is painted.  Joshua’s linework here is minimal, and quite sharp. The details arise from the shading and subtle textural variations. Here, the colors do the talking, and they do so very effectively. This is a strong image from a lesser-known but clearly very talented Creek/Seminole painter. 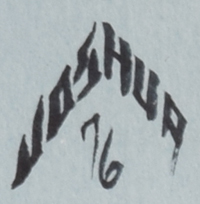 The painting is titled “Buffalo Hunter” in bottom center, and signed and dated in bottom right.  It is placed under black matting within a black frame. 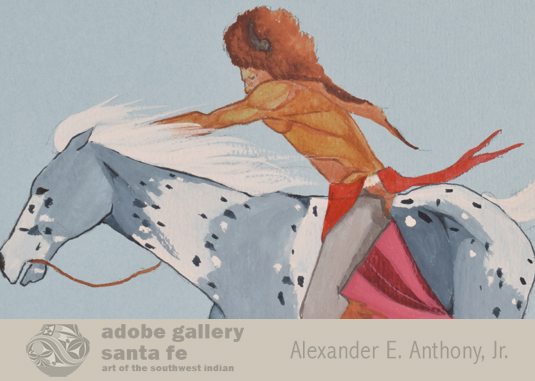 The Life and Art of Jerome Tiger: War to Peace, Death to Life
by Peggy Tiger, et al