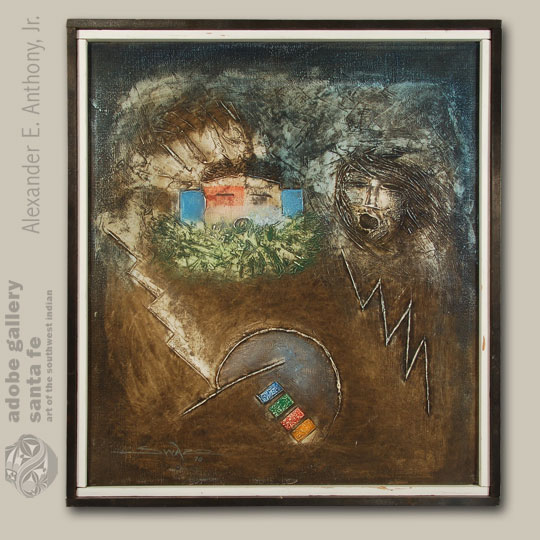 This painting was executed by Patrick Swazo Hinds in 1970, at a time when he must have lived in Santa Fe, as he wrote his Santa Fe address on the back of the canvas. It features the faces of a katsina, a male singer, and a drum.  It was executed in oil on canvas with added textured sections. It is framed in what is obviously a hand-made frame, most likely made by the artist.

Patrick Swazo was born at Tesuque Pueblo in 1929 and given the name José Patricio Swazo.  He was adopted by Dr. Norman A. E. Hinds, honorary member of Tesuque Pueblo and Professor of Geology at the University of California for 45 years.   Not long after his adoption, Swazo moved to California where he resided until his death. He usually spent his summers at the pueblo. He served in the United States Marine Corps and served in Korea.  His education included attendance at High School in Berkeley, California; Hill and Canyon School of Arts in Santa Fe, New Mexico; California College of Arts and Crafts in Oakland; Mexico City College, Mexico City; and the Art Institute of Chicago.

Swazo became a full-time painter after 1968 but most of his paintings are not dated.  He died in 1974 so it can be assumed that most of his art was produced in the 6 years between 1968 and 1974.  He also produced lithographs as well as original paintings.

Pueblo scenes were popular subjects for Swazo during his visits to the pueblo in summer months, but he also produced water scenes during his stays in California.

Condition: this Original Oil Painting "Among the Gods" appears to be in original condition.

Provenance: Originally from the collection of Richard M. Howard, who recorded it was painted in 1972.  Now from the estate of Santa Fe art dealer and collector Martha (Marti) Struever. 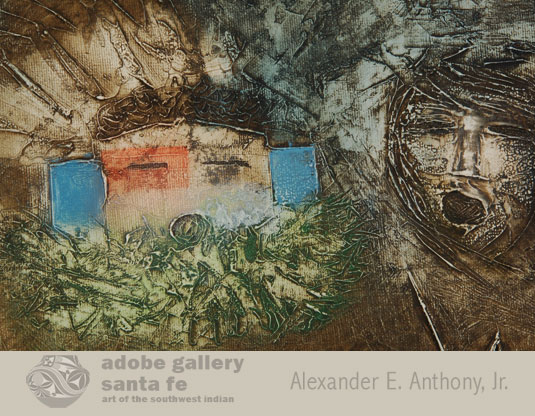