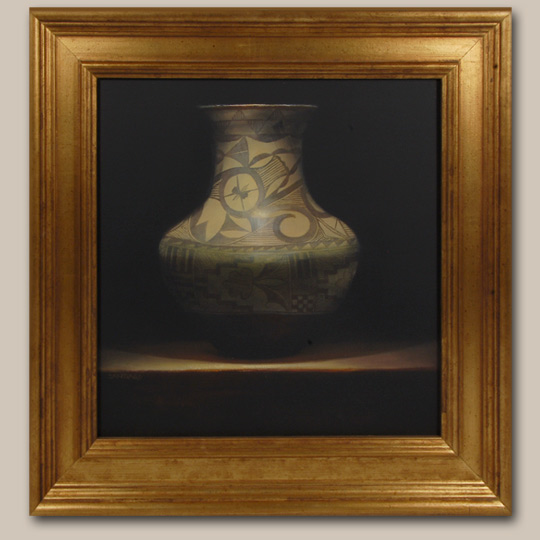 "Evening Light" is an apt title for this magnificent Acoma Pueblo jar that is bathed in soft light on its upper section and rendered in shade on its lower section. Roseta Santiago has mastered the techniques of lighting the subject she plans to paint. The jar rests on a dark wood plank and is backed by black. The jar is the highlight of the painting, rendered in a soft palette, with no other objects to distract from its presence. The fine black lines of the design are softly played against the cream color of the jar. The shadow cast downward from the rim focuses one's eyes to the graceful, curved neck and its intricate designs.

Roseta Santiago has painted an object made for daily use at the Pueblo and has presented it in a magical and spiritual way.  She has played with our emotions in seeing a functional object as a beautiful and necessary item of daily use that is at the same time an art object and an object with a spirit of its own. Her true inspiration was a jar we once had, which was made by Acoma Pueblo matriarch Mary Histia (see above image).

Provenance: this Painting of Historic Acoma OLLA titled "Evening Light" by Roseta Santiago is from the artist in 2009