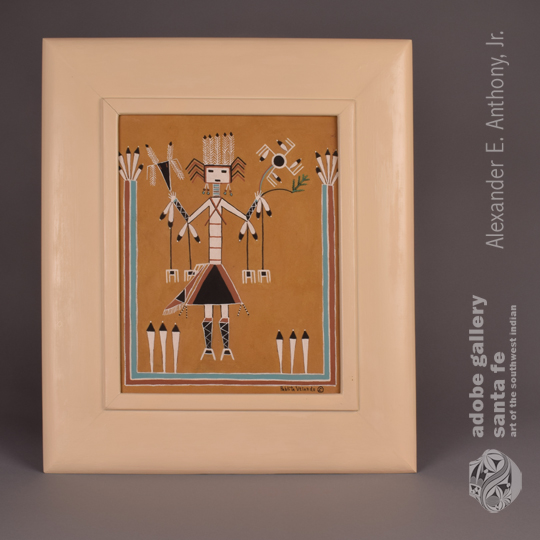 Velarde painted in the traditional style of the Santa Fe Indian School, creating accurate portraits of Native American life and culture. At first she worked in watercolor, but later learned how to prepare paints from natural pigments—a process called “Fresco Secco.”  She is best known for these mineral earth paintings. She ground mineral and rock elements on a metate and mano until the result was a powdery substance. From this substance her paints were made. She also painted on paper, often using casein in addition to earth pigments. She was also known to create art derived from the Navajo sandpainting tradition.

Velarde’s list of accomplishments and accolades is long and varied.  Her works have been exhibited around the country and are included in many prestigious public and private collections.  Author and anthropologist Clara Lee Tanner called her the “greatest woman artist in the Southwest.” Her daughter Helen Hardin and her granddaughter Margaret Bagshaw were themselves very successful and influential painters, creating an artistic dynasty that spanned three generations.

This painting, titled “Moisture in the Morning Yei,” is an excellent early work by Pablita Velarde.  It was completed on a board using the aforementioned mineral earth pigments. It is presented in its original frame, which contributes immeasurably to its charm.  The image itself is of one of the specific styles mentioned above—art derived from Navajo imagery. Velarde’s affection for these images is apparent in this sensitive and skillful rendition.  The titular Yei figure is placed in the center of the image. She—her square head identifies her as female—is surrounded by a simple, three-color version of a guardian rainbow. Above her left hand is a whirling log symbol, which is linked to her hand by a smaller rainbow.  Black and white feathers decorate the scene beautifully.

This excellent early Pablita Velarde painting was brought to Adobe Gallery by a member of the artist’s family.  It is signed in the lower right corner. Its title is marked in pencil on the back of the frame.

Condition: Good condition for a piece of its age.  A few minor stains and discolorations are visible.