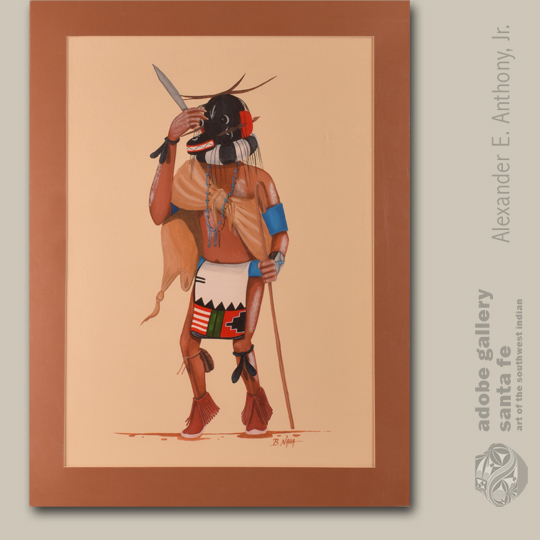 This Hopi Pueblo Painting by artist Brent Naha depicts Chaveyo Katsina who is Sergeant Snorkle of Kachinas and shows you error of your ways in duties and rules.

Barton Wright’s Kachinas: A Hopi Artist’s Documentary provides a thorough description of Chaveyo’s form and function: “Chaveyo is one of the more cosmopolitan kachinas.  He is represented in nearly every pueblo, but his original home was probably in the San Juan area of New Mexico. However, for the Hopis his home is the San Francisco Mountains, and he is the husband of Hahai-i Wuhti. The family of Hahai-i Wuhti and Chaveyo are the Nataskas, the dreadful Sosoyok’t. Chaveyo is the Sergeant Snorkle of the Kachinas. Should any Hopi fail to meet his obligations in community work or transgress the unspoken rules of conduct for the village, Chaveyo will show him the error of his ways.  Chaveyo often appears with Soyoko on First Mesa but can appear for the same purpose anytime during the Spring months. However, he is usually seen in the Powamu or Palölökongti (Water Serpent Dance) being badgered by the clowns who eventually will be soundly whacked for their efforts. This ‘giant’ kachina is a favorite of kachina carvers and his irritable cantankerousness usually shows in the dolls that represent him. Those who see him for the first time at a kachina dance usually remember the kachina with ‘all those feathers and a sword’.”

This untitled painting features Chaveyo in exactly the position that is described in Wright’s book—”he lifts the hair out of his eyes so he may see who is bedeviling him.”  At about 18 inches in height, B. Naha’s Chaveyo is large and impressive. His size allows the viewer to take a good look at his mask, kilt and ceremonial adornments, which are depicted carefully and accurately.  Naha uses his colors rather than outlines to define his subject. There is no background, just a thin brown line and a few brown spots creating the ground upon which Chaveyo stands. Naha added subtle shading to certain areas, giving the image depth. He or she is (or was) a skilled painter, and after viewing Chaveyo, one cannot help but wonder what else the artist created.

A search of our reference books, the internet, and various auction records turned up no information about B. Naha.  It is reasonable to assume that B. Naha is (or was) Hopi, because of his or her name and the subject of this watercolor painting: a Chaveyo (or “Ogre”) Katsina.  *We furhter believe this is the work of Brent Naha, who a was Hopi Pueblo painter for only a brief period as he passed away in 1986 at the young age of 31 years. He was possibly the son of Raymond Naha, but we have not yet verified that information.

Condition: this Original Painting of a Chaveyo Katsina is in very good condition with a few barely noticeable marks on the paper 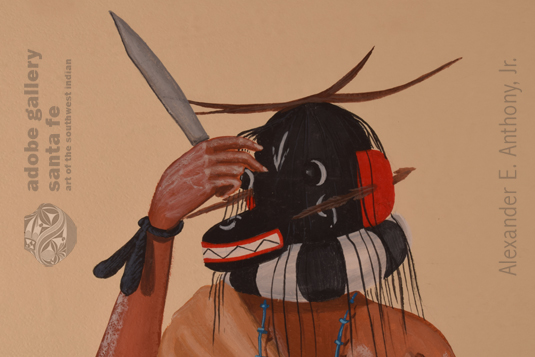