Original Painting of a Mudhead Katsina by Pablita Velarde [SOLD] 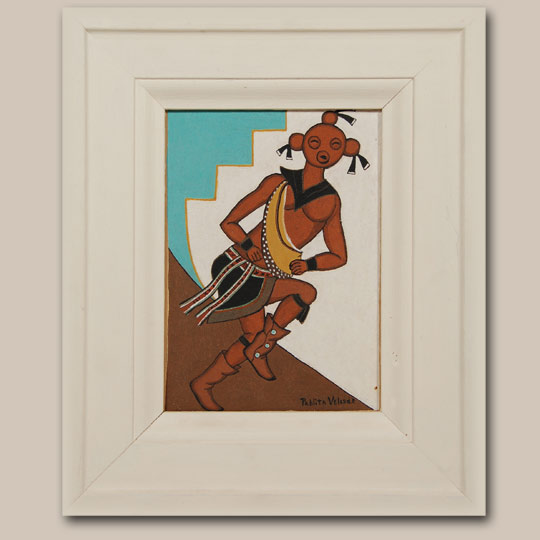 In the 1960s, when the Balcomb family operated an art gallery in Gallup, New Mexico, at 915 West Coal Avenue, Mrs. Balcomb, the family matriarch, signed a contract with Pablita Velarde (1918-2006) Tse Tsan - Golden Dawn for the Balcomb's to make silkscreen prints from four of Pablita's original mineral earth paintings. The four selected paintings were a single Koosa Clown figure, a single Mudhead Katsina figure, a pair of Koosa Clowns and a pair of Mudhead Katsinas.

Mrs. Balcomb made 1000 copies of each of the four images and she, herself, printed the silkscreens at the gallery. There was only the one run.

This painting of a Mudhead Katsina is the original art for the silkscreen prints that were made in the 1960s. It is one of the original paintings retained by Mrs. Balcomb. It is signed in lower right and framed in the original frame selected by Pablita Velarde.

Provenance: from the estate of Mrs. Balcomb passed on to the family.