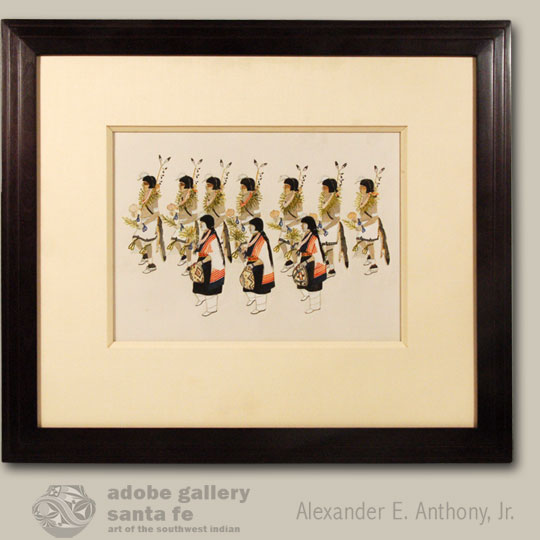 This San Ildefonso Pueblo untitled watercolor painting features ten dancers and was made by Quah Ah, known as Tonita Peña. In the foreground are three female dancers. Behind them is a line of seven male dancers. The way they are arranged is particularly pleasing, with the bold black of the women's dresses jumping out in front of the softer tones of the men. The women carry colorful, elaborately designed baskets; the men carry rattles and evergreen boughs. As with their clothing, the items carried by the men are softer in color and composition than those of their female counterparts. In consultation with Elvis Torres of San Ildefonso, he concurred that this is probably a basket dance, but the headdresses are different than those at San Ildefonso, so it probably is a dance that Tonita Peña witnessed at Cochiti Pueblo.

This piece will be of particular interest to those who appreciate the subtleties of Peña's art. Her colors here are muted, with light grays and soft greens serving as the dominant shades. Her outlines are wider than usual but just barely visible, having been completed in a nearly transparent gray. Her keen compositional eye is, as always, evident in the graceful arrangement of her subjects. Her subjects' faces are thoughtfully and sensitively rendered in a manner that is unique to Peña's work, allowing knowledgeable collectors to confidently attribute this unsigned work to the pioneering pueblo painter.

The painting is signed "Tonita Peña" in lower right.

Tonita Peña (1893-1949) Quah Ah was born in 1893 at the small New Mexico pueblo of San Ildefonso. The pueblo is located on the Rio Grande, just north of Santa Fe. When Peña was just twelve years old, her mother died. Her father, unable to raise her while tending to his responsibilities at the pueblo, took her to live with her aunt and uncle at Cochiti Pueblo. This was where she would spend the remainder of her life. Peña was the only woman in the group of talented early pueblo artists referred to as the "San Ildefonso Self-Taught Group," which included such noted artists as Julian Martinez, Alfonso Roybal, Abel Sanchez, Crecencio Martinez, and Encarnación Peña. These artists were the earliest known pueblo painters. Today, their works are highly collectible not just because of their historical significance but because of their quality.

Peña is recognized as the first Pueblo Indian woman to make a living as a painter. By the time she was 25 years old, she was a successful easel artist. Her work was being displayed in museum exhibitions and in commercial art galleries in Santa Fe and Albuquerque. She painted what she knew best—scenes of life at the pueblo. She mostly painted ceremonial dances, and occasionally depicted everyday events. She did so with incredible skill and sensitivity. It is apparent in her works that she truly knew and respected each of the rituals she depicted. In the years since her passing she has come to be regarded as one of the greatest Indian artists of all time. Her works are displayed in prominent public and private collections around the country. Peña failed to sign the painting: however, expert art consultants have verified that it is the work of Quah Ah.

Condition: good condition with some stains around edges

Provenance: from the large Native American Paintings collection of a New Mexico resident that included several of Peña’s paintings 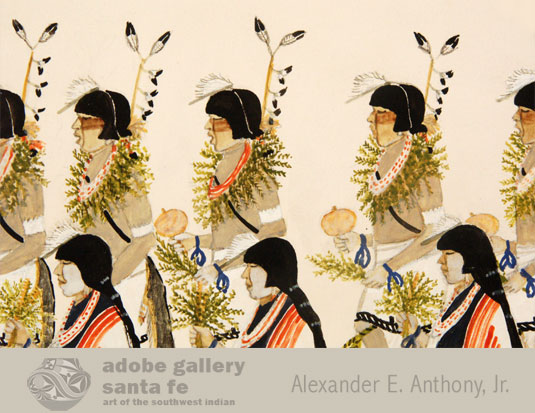