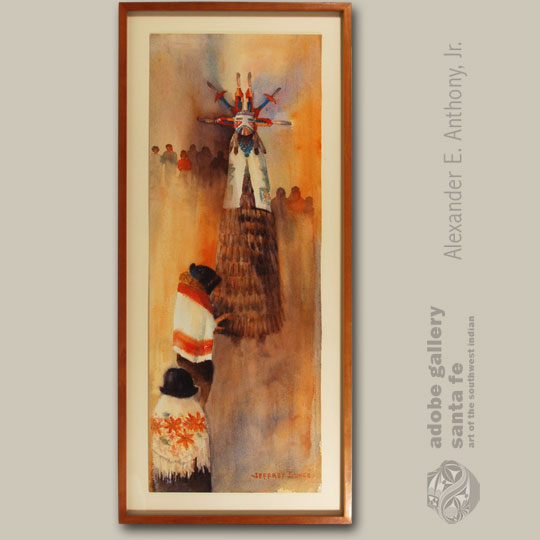 Jeffrey Lunge (1905 - 1993) was one of the many European artists who was drawn to the rich culture and incredible natural beauty of the Southwest.  Originally from England, Lunge’s family lived in Canada and then Southern California. He took an interest in art at an early age and developed into a skilled watercolorist during his formative years.  His primary interest was in creating landscapes. Lunge was introduced to the Southwest by anthropologist (and future Museum of Northern Arizona director) Edward B. Danson, who brought the artist to Arizona’s Hopi and Navajo reservations. In 1968, after fulfilling his professional obligations in California, he moved to Arizona and devoted his time and energy to creating beautiful depictions of the Southwest and its peoples. His works that feature Hopi and Navajo cultural and religious rituals are particularly effective because they feel incredibly sensitive.  His affection and respect for these ceremonies is apparent in his paintings. He painted until 1985, when his failing eyesight forced him to stop painting. Lunge passed away in 1993.  With this untitled watercolor painting, Lunge created a Salako Mana Katsina and two Hopi maidens.  Barton Wright’s book Kachinas: A Hopi Artist’s Documentary provides an excellent description of this Katsina: “The Salako Mana is the sister of the Salako Taka and they always appear as a pair.  Salako Mana is distinguishable from the Salako Taka by her white face and the square turquoise earrings that most unmarried girls used to wear. She is usually somewhat shorter and wears the high white boots of the women.  The wraith-like appearance of these kachinas comes mainly from their shoulderless build.”Lunge’s Salako Mana is incredibly well crafted, with detail included exactly where it should be: the Katsina’s mask and clothing.  Her “shoulderless build,” too, allows the viewer to easily identify her. The only other area of specific detail—the patterned shawl worn by one of the maidens—resides in the painting’s lower left corner, adding a decidedly human aspect to the image.  The rest of the image is more abstract, with warm watercolors blended into and over one another to create a gorgeous, colorful background. Within the warm background, cooler colors create the shadowy frames of a gathering crowd. It almost feels as if Lunge painted his memory of a dream, with a few graphic details surrounded by hallucinatory abstraction.  Whether deliberate or not, the effect created by combining these contrasting styles resulted in a beautiful and unique image.

The painting is signed and mounted in a simple wood frame with its edges exposed.

Condition: this Original Painting of Hopi Salako and Two Maidens is in excellent, original condition

Provenance: from the large collection of a Santa Fe resident who is downsizing 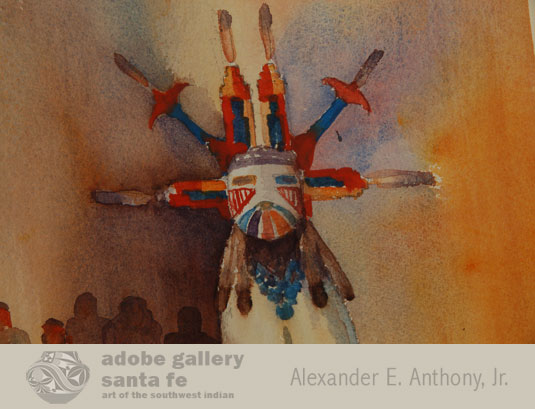