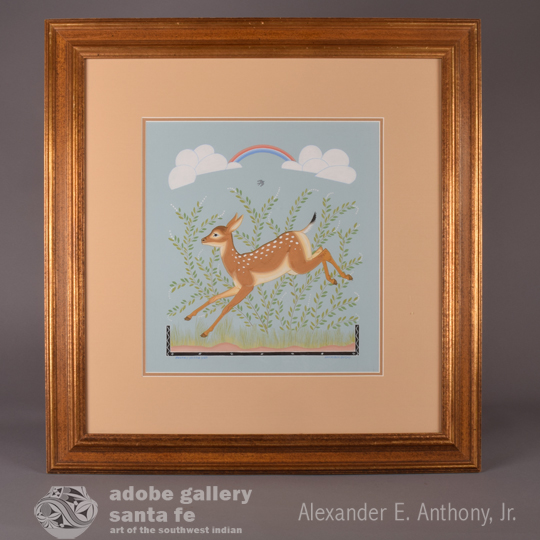 Diné painter Harrison Begay (1917-2012)  was a master at creating warm, pleasant images that would appeal to a wide variety of potential patrons.  His preferred subjects were scenes of daily life on the Navajo reservation. A variety of animals factor into the Diné lifestyle, and so Begay’s paintings are full of wildlife.  His animals are cute, but not in a cartoonish or otherwise exaggerated way. He created these images prolifically and sold them successfully throughout his long career.

This piece is a fine example of Begay working within that style—creating images that were decidedly Southwestern but would appeal to a wide audience.  His subject here is a fawn. It’s depicted in motion, leaping forwards, about to plant its front legs on the ground. Begay’s work with the fawn is particularly strong, with intricate linework and carefully textured shading.  The plant in the background—which begins beneath the fawn before winding up and around in various directions—is atypical, providing a welcome dash of green to the desert scene. A bird, far in the distance, crosses the sky underneath two clouds linked by a rainbow.

The painting is signed “Haskay Yahne Yah” in lower left and “Harrison Begay” in lower right.  The wide black framing line, which is decorated with white zigzags, suggest that the painting was completed during the 1960s or 1970s.  It is framed beautifully, under two mats in complementary beige tones in an elegant and beautiful gold frame.

Condition: this Original Painting of Leaping Fawn under Rainbow is in excellent condition