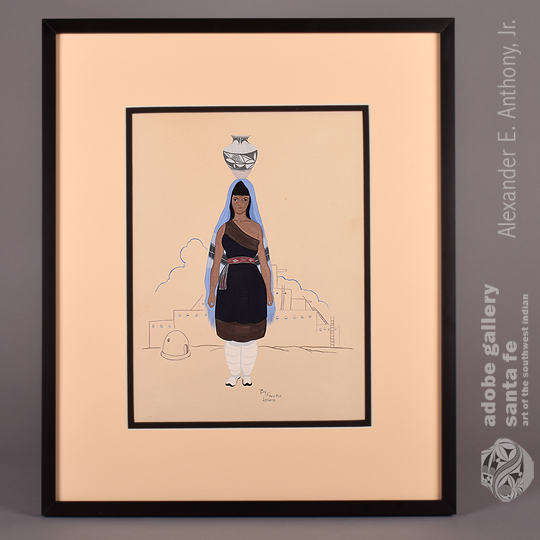 The intriguing smile of the Acoma Pueblo maiden in this painting is reminiscent of Leonardo da Vinci's memorable Mona Lisa. Added to the fact that the artist is unknown to us, this watercolor has an element of mystery. Who was Felicitas Lucero? Who painted her? When and where was it painted? Unfortunately, we do not know the exact answers to most of these questions, but we have clues.

What we can say is that it is a skillfully rendered image of a Pueblo woman with an OLLA on her head. There are photographs from the late 19th and early 20th centuries that chronicle women from Acoma and Zuni pueblos carrying ollas or water jars on their heads.  This jar appears to be of Acoma origin and the name Lucero is more an Acoma family name than Zuni.   The subject is dressed in traditional Pueblo attire—a black manta fastened on her right shoulder, white deerskin moccasins that cover her legs, a colorful shawl over her head and a finely woven red sash around her waist. Details of the clothing seem to indicate that the artist was quite familiar with elements of traditional Pueblo dress. A well decorated OLLA is on the head of the woman, who stands in front of a multi-storied pueblo village.

The OLLA has black-on-white design elements. And there are multi-storied buildings behind the Pueblo female. Only a few Pueblos today still have these multi-storied structures. With these clues, we can give an educated guess and suggest that the location is atop the mesa at Sky City or Acoma Pueblo, New Mexico.

During this time period, Pueblo women were expected to make pottery and not paint. And so, there were only a few Native American female easel artists in the early 20th century. It was only until the first woman pushed through this glass ceiling and demanded she be taken seriously. Quah Ah was this brave woman. She mentored other Native American women and girls, such as Pablita Velarde and apparently this artist, to do what they want and paint instead of making pottery. It is most probable that this piece was made during the second half of the 20th century and is most rare. It is signed By Felicitas Lucero. We are unable to find any biographical information about this talented Pueblo artist.

Condition: this Original Painting of Acoma Pueblo Maiden with Pottery by Felicitas Lucero appears to be in good condition.  It has been recently framed using archival materials and regular glass.