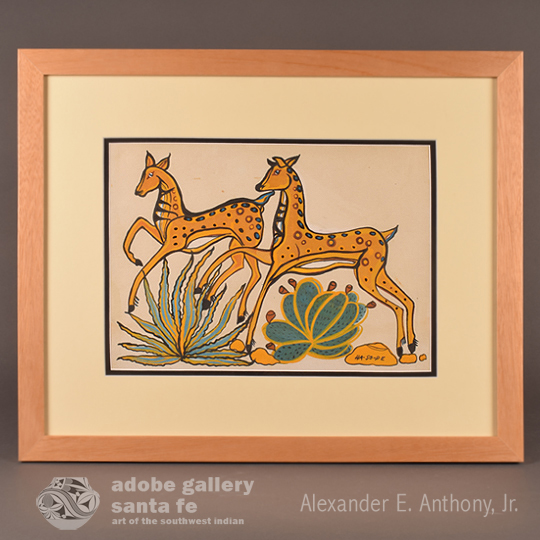 Ha So De’s paintings can be challenging, with their Diné mythological images and surreal, psychedelic compositions.  This image, however, will appeal to many. It’s pleasant and accessible, and could fit into any collection. Ha So De’s subject here is a pair of deer, pictured in motion, stepping over a pair of plants.  The colors—a strong yellow and a wonderful sea green—are simple and restrained, compared to those of his wilder works. His most recognizable tendency was his unusual linework, which is often layered using multiple colors. Here, he mostly limits himself to single black outlines. This being a Ha So De painting, though, it is not without its unusual traits, the most noticeable of which being the blue accents added to the deer. The linework, too, occasionally veers away from realism and towards the “wild, free” style mentioned by Dunn. This excellent Ha So De painting will have a broad appeal while still delighting those with an appreciation for individualism.

Narciso Platero Abeyta (1918-1998) Ha So De - Fiercely Ascending was a Diné painter and silversmith.  He was, among other things, a Golden Gloves boxer and one of the hundreds of Navajo Code Talkers who served in the Marines during World War II.   He and wife Sylvia Ann had seven children, many of whom—Tony Abeyta, Elizabeth Abeyta Rohrscheib and Pablita Abeyta—became notable artists themselves. He is highly revered by collectors of Native American art, and his works are included in numerous prestigious public and private collections. Because of his unique style, his talented and successful children, and his influence on younger painters, he is regarded as one of the most significant Native American painters.

Abeyta received his initial art education at the Santa Fe Indian School, whose art instructor, Dorothy Dunn, commented on his abilities in her book American Indian Painting of the Southwest and Plains Areas: “Ha-So-De developed a markedly unique style, although, in his formative period, his admiration for the work of (Navajo painter Andy) Tsihnahjinnie could be clearly seen.  It was a fine influence and used honorably by the younger painter. His paintings of hunt and home scenes were broad in brushwork and flowing in line, at times appearing almost nonchalant. He was never concerned with small detail but only with the sweep and dash of movement in wild, free scenes. His was a positive art.” Abeyta received further education at the University of New Mexico, where he studied under famous modernist painter Raymond Jonson.

While his earliest works bear an Indian School influence, the majority of Abeyta’s works are composed in a manner that is atypical of the Navajo painters of his day.  His subjects—horses, hunters, Yei figures, ceremonial and daily rituals—were decidedly Navajo, but the style in which he depicted these subjects was all his own. While his peers favored detail and naturalism, he favored stylization and abstraction.

Condition: this Original Painting of Two Yellow Deer has minor stains in a few areas

Provenance: from the collection of a Texas resident