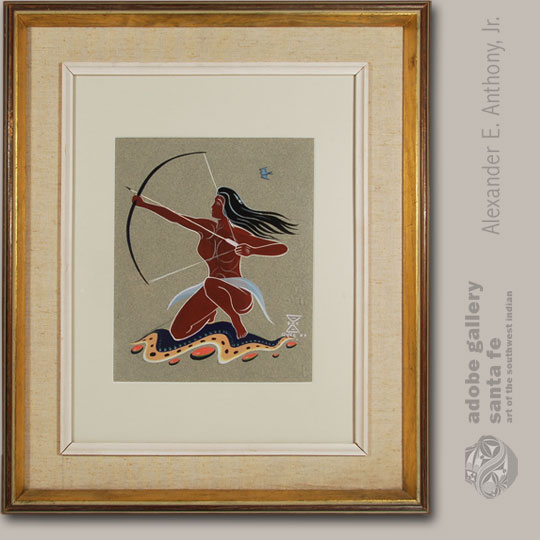 Adee Dodge was the grandson of the first Navajo Tribal Chairman, Chee Dodge.  He studied at the University of New Mexico and received a master's degree from Columbia University in Comparative Linguistics and Anthropology. He started painting while recovering from war wounds he received while serving in the South Pacific during World War II.  A self-taught painter, he focused his work on preserving the symbols and stories of the Navajo religion. His work has been featured in Arizona Highways and at the Smithsonian.

His trademark was the Navajo hair-roll, which is a symbol of the Navajo people. Under this he would sign his name Adee.  He would also include birds, the bluebird, which symbolizes the Seagoing people of the East and the flying swallow, symbol of the Swallow people of the West. In his Introduction to The American Indians of Abeita, His People, Joseph Stacey said "...There have been some great names in the roll of Navajo artists...Adee Dodge, one of the most prolific Navajo artists, is collected for his spirit horses and fastidiously drawn interpretations of Navajo myths and legends."

This painting is of a single figure female archer with bow taut and arrow ready to release.  Dodge had a time where his paintings reflect influence of the Art Deco period. It is quite apparent in this painting.  The archer appears to be nude with long flowing black hair. She is kneeling on an abstract and colorful design. It is signed in lower right and dated 1959.

Condition: this Original Painting Titled "Navajo Archer" appears to be in original condition but has not been examined out of the frame. The fabric on the frame is buckling at lower right.

Provenance: from the estate of a New York client who amassed a large art collection of Native American artists.