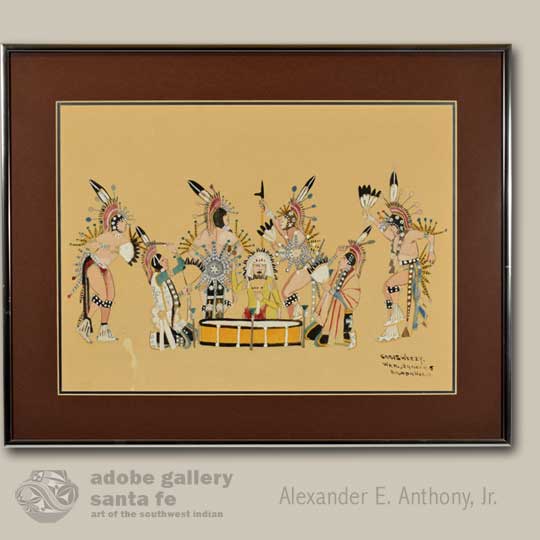 This wonderful painting, titled “WAR DANCERS ARAPAHOES,” was completed using tempera paints on paper.  Arapaho painter Carl Sweezy’s subjects here are seven Indian men—four dancers and three drummers.  The three drummers gather around a massive drum, which is situated in the center of the scene. They’re on their knees, with one facing directly towards the viewer and two depicted in profile. Each one raises a drumstick in his right hand and opens his mouth in song. Behind and around the drummers, the four dancers move emphatically. Three are depicted in profile, one is seen from behind. The symmetrical arrangement of these seven figures, each of whom is in a different position or seen from a different angle, results in an especially refined composition.

The figures themselves are simple and charming, but quite skillfully crafted, too. Their ceremonial clothing is pictured in careful detail, as was the norm for Sweezy and his peers.  The artist’s substantial color palette served the image well, allowing him to present the details of his dancers’ garb with ethnographic accuracy.  Most appealing, here, is the image’s inherent energy. This image serves as an excellent example of Sweezy’s lively, dynamic style.

The painting is signed Carl Sweezy and titled “WAR DANCERS ARAPAHOES” in its lower right corner.

Carl Sweezy (1879-1953) Wattan was a talented and influential Arapaho painter and ledger artist. Sweezy was born in 1879 on old Cheyenne-Arapaho Reservation in Oklahoma. His father was Hinan Ba Seth (Big Man) and his mother, unfortunately, died when he was very young.  Sweezy attended Mennonite Mission Schools in Oklahoma and Kansas. He also attended Chilocco and Carlisle Indian Schools. Sweezy’s Indian name was Wattan, or “Black.” He was also known as “Waatina.”  Sweezy’s style was informed by Plains ledger art, which was flourishing during his early life. He occasionally created ledger art and painted portraits, but he is best known today for his excellent watercolor paintings. Sweezy’s long list of notable exhibitions includes the American Indian Exposition, Philbrook Arts Center, and the Inter-tribal Indian Ceremonials in Gallup. His works are included in the collections of the Smithsonian Institution, Chicago Natural History Museum, Gilcrease Institute, Museum of the American Indian, and University of Oklahoma.  Sweezy passed away on May 28, 1953 in Lawton, Oklahoma.

Condition: this Original Painting titled "WAR DANCERS ARAPAHOES" by Carl Sweezy is in good condition, with an aberrant paint stain below the figure on the far left 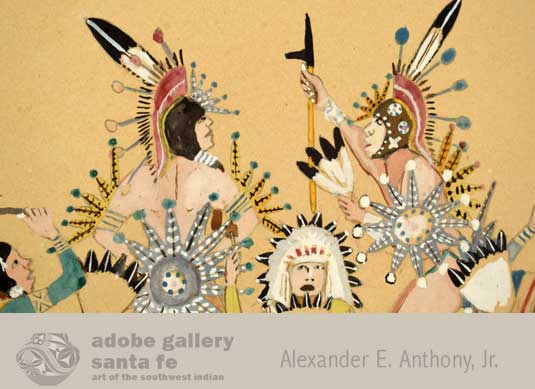