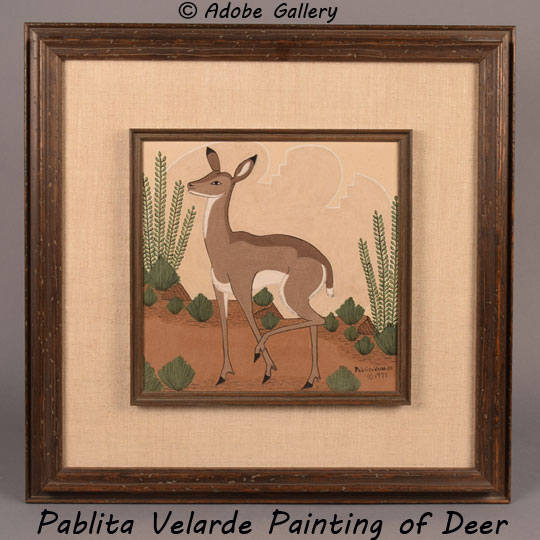 This original painting of a deer was created by Pablita Velarde of Santa Clara Pueblo. While ceremonial dancers occupied the majority of Velarde's works, she did direct her attention toward wildlife on occasion. Many of her animal figures were, like those of her contemporaries, influenced by prehistoric Mimbres designs. With this piece, Velarde presented a realistic, straightforward depiction of a single deer.

The deer stands in the center of the image. It is depicted in profile, with a serene facial expression. Velarde's gray and white mineral earth pigments work perfectly for this particular animal. The landscape in which the deer stands is, by high desert standards, rich with plant life—over a dozen small green plants appear on the ground, and taller plants grow along the edges of the scene. Further into the background, geometric shapes in earthy tan tones appear, just as they would in Velarde's ceremonial dance scenes. This painting is simple, strong, and beautifully composed.

The painting is signed Pablita Velarde and dated 1977 in lower right. It is framed in a wood frame, which is mounted on a fabric backing within a larger wood frame. This was the style preferred by Velarde and her daughter Helen Hardin during this era.

Provenance: this Pablita Velarde Original Painting of Deer dated 1977 is from a private New Mexico collection