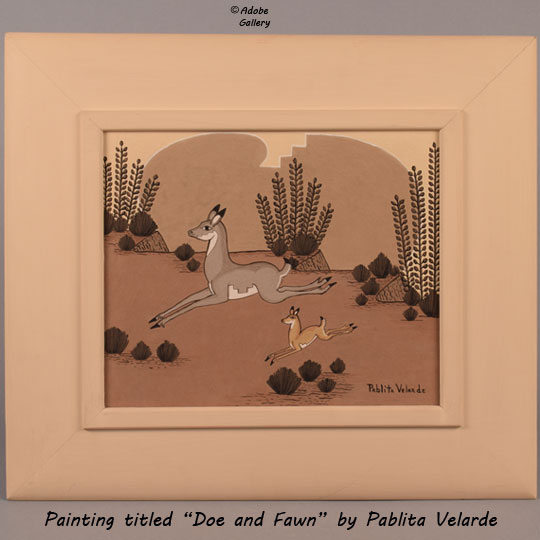 "Doe and Fawn" is an original painting by Pablita Velarde of Santa Clara Pueblo. Velarde is best known for these earth pigment paintings, which were made with mineral and rock elements. She would grind these minerals into powdery substances using a metate and mano, and then use the powder to create her paints. Her most frequent subjects were pueblo ceremonial dances and scenes of everyday Native life. Pablita worked in water-based paints from time to time, mostly casein, but she is best known for her paintings rendered in the mineral earth pigments.

She would first draw her designs on Masonite panels that were treated with a coat of pumice. She then used her ground-up minerals as paint to fill in the areas she had drawn. To mix her paints, she combined the pigments with water and glue, and then painted with commercial paint brushes. She would paint each color with as many as seven layers to gain the consistency she desired. She then would outline the images—again, as many as seven times—to ensure that they were strong in color.

With this piece, Velarde presents a sweet scene in which a doe and fawn run through a desert landscape. They leap in unison, extending their front legs forward toward the dry earth. In the background, a cliff twists and turns, forming a jagged horizon line near the center of the image. Geometric shapes with kiva step patterns appear in the background and, in a unique touch, within the doe and fawn themselves.

The painting is signed Pablita Velarde. It is framed in the neutral-colored wood frame that Velarde preferred for much of her career.

Provenance: this Original Painting titled "Doe and Fawn" by Pablita Velarde is from a private New Mexico collection