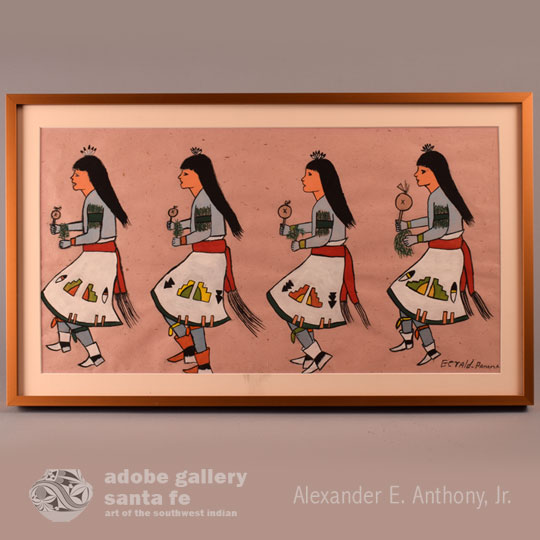 This painting by Gerald Panana of Jemez Pueblo is a charming and colorful Indian School student piece from the 1950s. It features four female corn dancers depicted in profile. They're nearly identical, positioned in a row over a pink background. They wear traditional dance regalia and carry rattles and evergreen boughs. The painting is clearly influenced by earlier Indian School paintings, which will appeal to our collectors. This is clearly a student's work-mistakes abound, pencil lines are visible, colors run into one another-but it's very appealing and, of course, full of energy and enthusiasm. Panana followed in the footsteps of his predecessors by paying attention to the details of his dancers' clothing.

The painting is signed Gerald Panana in lower right.  It is placed under a thin, off-white mat within a metal frame.

It appears that Gerald Panana did not pursue a career in the arts, and so very little information is available.  His name is listed in Jeanne Snodgrass’ “American Indian Painters: A Biographical Directory” in conjunction with a 1958-1959 exhibition at the Museum of New Mexico.  That exhibition—their “Contemporary Indian Artists Annual Exhibition,” most likely—was where this painting was originally sold, alongside works by other Indian School students.

NOTE; we were informed that Panana currently is living in Oklahoma.