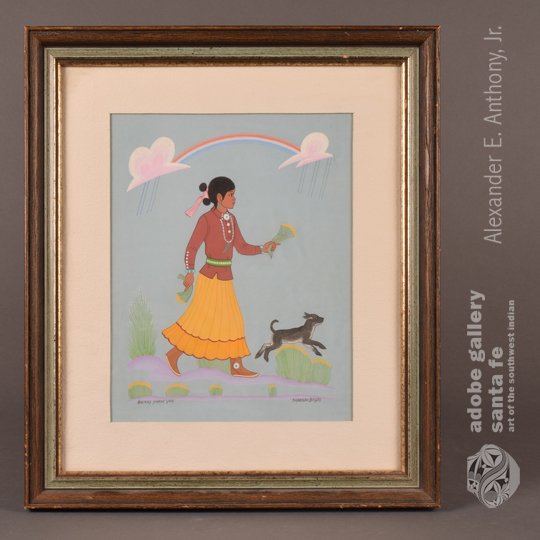 The high desert climate of the Navajo Reservation provides the perfect growing conditions for Navajo Tea. Also known as “Greenthread” or “Thelesperma”, it is a wild plant that thrives in the mid-summer heat. It is characterized by small yellow flowers that appear when the plant is ready to be harvested.  The stems—which feel like small, stiff straws without leaves—are what is used for tea. Correct harvesting requires that the plant not be pulled up by the roots. After harvesting, the stems are tied into small bundles and boiled. Traditionally, the tea is used for a variety of ailments. It is known to soothe sore throats and comfort upset stomachs. The herb contains flavonoids that are known to prevent inflammation and purify the blood.  While in past times the harvesting of the tea was an annual family ritual, it is now possible to purchase the tea in bags at stores.

This small painting by Harrison Begay (1917-2012) features a young Diné woman gathering the aforementioned plants.  She’s dressed beautifully, depicted accurately and carefully, and pictured in profile and in motion. A soft wash of pink and white provides the ground on which she stands.  Bolder applications of the same colors create two lively clouds, which are linked together by a rainbow. This is a classic Begay image that was executed in the 1970s, during what many regard as one of his strongest periods.

Condition: this Painting of Young Diné Girl Gathering Tea is in excellent condition