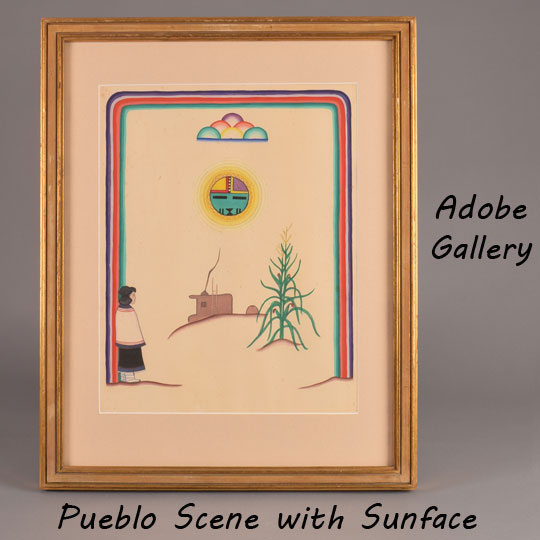 This charming original painting is most certainly of Pueblo Indian origin, and it’s most likely an earlier piece.  The earliest known Pueblo painters began working at San Ildefonso in the early 1900s.  Later, in the 1930s, the Santa Fe Indian School’s Dorothy Dunn taught painting to a group of young artists who would go on to achieve great success.  These students—some of whom were also members of that earlier “self-taught” San Ildefonso group—often made images that combined elements of the traditional style with more personalized touches. Though we can’t say with certainty, this piece might be an early experiment by one of those Indian School artists.

We took a look through our records and found a piece with similar characteristics by the great Popovi Da (link to C3874o).  There are quite a few similarities between the two pieces.  This one, of course, is quite a bit simpler.  We posit that, were this created by Popovi, it was made long before the more complicated, refined image from our archives.  Again, we cannot say with certainty who made this, and we invite the comments of anyone who has information to offer.

Whomever its maker may have been, this painting is charming and unusual.  In the foreground, a young woman stares off into the distance.  Further in the background, we see that she’s looking at a pueblo building, an horno oven, and a large corn plant.  The sky above the building is decorated by colorful sun and rain cloud designs, and the entire image is framed by a vibrant rainbow.  The painting has not been subjected to sunlight, so its many bright colors appear as if they were applied just yesterday. This is a sweet and beautiful Pueblo Indian painting.

The painting is framed using archival materials in a gold frame.  It is unsigned, and not titled or labeled with any text.

Condition: good condition, with minor discolorations in the paper

Provenance: this Unsigned Original Painting of Pueblo Scene with Sunface is private collection of a resident of Santa Fe