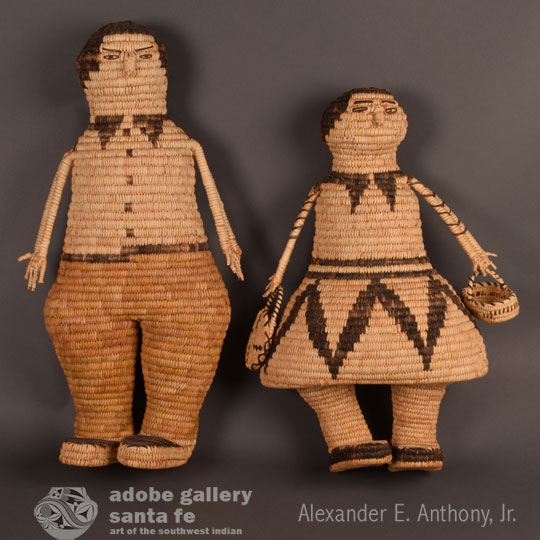 Life-form basketry was made as early as the 1940s but did not blossom into production until the 1970s.  Tohono O´odham (previously known as Papago) women made various forms of cactus, animals, birds, and eventually, humans. This male and female pair is likely from the 1970s era.

The male stands securely with a slight tilt forward.  The female leans too much forward and must be leaned against the wall or have a wedge placed under her feet.  The female carries a basket in her left hand and a purse in her right hand.

The Tohono O'odham tribal government and most of the people have rejected the historical name Papago, that was used by Europeans after being adopted by Spanish conquistadors from hearing other Piman bands call them this. The Pima were competitors and referred to the people as Ba꞉bawĭkoʼa, meaning "eating tepary beans". That name was pronounced Pápago by the Spanish and adopted by later English speakers.

The Tohono O'odham Nation, or Tohono O'odham Indian Reservation, is a major reservation located in southern Arizona, encompassing portions of Pima County, Pinal County, and Maricopa County and extends into the Mexican state of Sonora.

Provenance: from the collection and estate of Katherine Rust of Albuquerque.