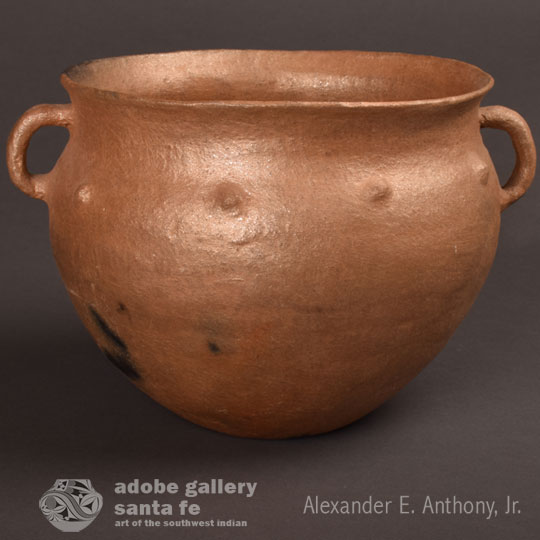 It has been determined that beans cooked in micaceous pottery vessels on top of a stove burner or over an open flame are unbeatable for flavor.  A restaurant in Santa Fe serves beans cooked in that manner and they sell micaceous bean pots too.

It does not appear that this one was ever used.  The previous owner purchased this in the mid-1940s and stored it wrapped in paper, never even displaying it.

"In the summer of 1958 the School of American Research, acting as agent for the Museum of New Mexico, funded a material culture survey at Taos and Picuris Pueblos. Documentary materials pertaining to the survey include photographs of Ramita Martinez and Lena Archuleta making pots, and illustrations of vessels collected from Lucita Martinez and Virginia Duran. One series of vessels, made by Ramita Martinez and decorated by her husband, Juan Jose Martinez, is indicative of the kind of experimentation that was taking place. A photograph of Juan Jose's tool kit indicates that he was using beer can openers and broken files, along with an assortment of bolts, nails, and screws, to produce tool-impressed designs on his wife's pottery." Anderson,1999:51