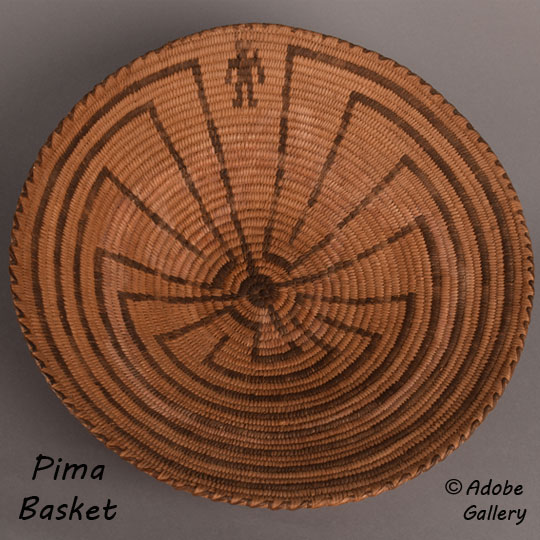 This Pima basket is very traditional in materials used by the O'odham basket makers. The foundation was formed from cattail stems, and the design from devil's claw. The other material used for the non-design area of the weft is willow. The stitching is very close-coiled.

The design is referred to as "Man in the Maze" and was used by both O'odham tribes. A small circle of devil's claw in the bottom of the bowl is the beginning of the design. From that beginning, a complicated maze develops to an end point where a man stands, ready to enter the maze. This maze design is very popular with collectors.

According to O'odham oral history, that labyrinth design depicts experiences and choices we make in our journey through life. In the middle of the "maze," a person finds their dreams and goals. When one reaches the center, we have one final opportunity (the last turn in the design) to look back upon our choices and path, before the Sun God greets us, blesses us, and passes us into the next world.

The Akimel O'odham (River People-Pima) were major basket makers in the late 19th century, primarily making them for their own use. At the turn of the following century, basket weaving was being practiced in every home. This continued into the early 20th century. By the 1920s, basket weaving had all but disappeared. By 1960, they were not even making baskets for their own use. They had, by then, substituted commercially made pots and pans for utilitarian use. What few baskets were made were to satisfy a commercial market of collectors.

Condition: this basket has the patina of one from the 1920s. It is in very good condition

Provenance: this Akimel O'odham Man in the Maze Coiled Basketry Bowl is from a private collection