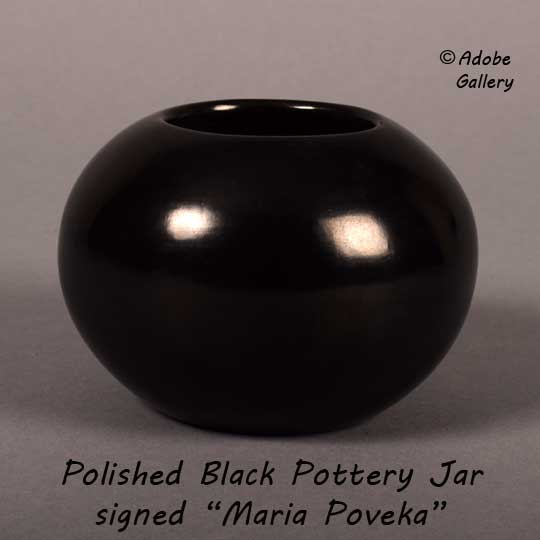 This polished blackware jar was made in the 1950s by San Ildefonso Pueblo artist Maria Martinez. It is signed Maria Poveka, which means that it was created without the assistance of a family member for painted designs. Unpainted pieces like this one allow the viewer to appreciate Maria's elegant vessel forms and skillfully polished slips.

This particular piece has a gorgeous shape. Were the top and bottom in place rather than formed into a flat rim and base, it would be almost but not quite spherical. The circular upper rim measures just under half the jar's diameter. The jar has a smooth, natural look. It's as if it was created effortlessly, which we know not to be the case—even smaller, unpainted pieces like this one require incredible amounts of skill and effort to make. San Ildefonso Pueblo artist Maria Martinez (1887-1980) Poveka is probably the most famous of all pueblo potters. She and her husband Julian discovered in 1918 how to produce the now-famous Black-on-black pottery, and they spent the remainder of their careers perfecting and producing it for museums and collectors worldwide. Maria collaborated with several family members over the years and also made unpainted pieces on her own. She is one of the most influential and historically significant Native artists. Her works are included in major museum collections around the world, and she is frequently cited as one of the most influential Native American artists.

Provenance: this Polished Black Pottery Jar signed "Maria Poveka" is from the collection of Bob & Louise Sluder, dealers/collectors active from 1955 to 1990