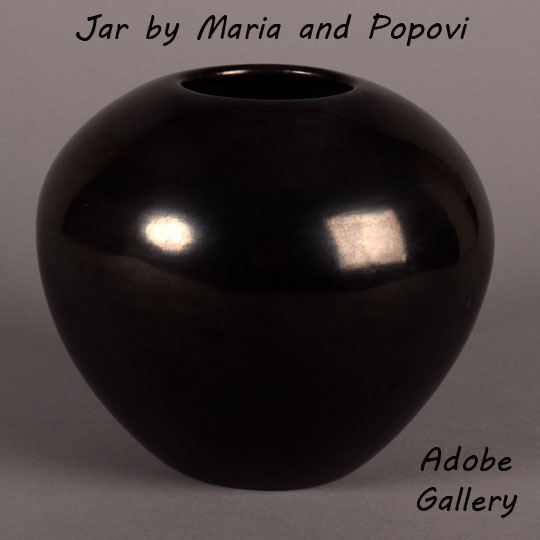 This gorgeous blackware jar was made at San Ildefonso Pueblo in 1970, by Maria Martinez and her son Popovi Da.  This date places the piece at the end of the mother and son team’s 15-year collaborative period.  Their wealth of shared experience is evident in this flawless example of San Ildefonso blackware.  Its form is simple and tasteful, with gently curved semicircles leading to a base and rim that are nearly identical in size.

The jar is unpainted, which allows its exquisite, polished surface to truly shine.  Under light, the jar appears unusually bright and reflective at times, occasionally recalling the effects of the “gunmetal” finish that appears on certain pieces of San Ildefonso pottery.  Were a classification required, we’d say that the piece falls somewhere in between traditional blackware and gunmetal.  Whatever the artists’ intentions might have been, this is an undeniably strong example of San Ildefonso pottery. Maria Martinez (1887-1980) and Popovi Da (1922-1971) were San Ildefonso Pueblo artists. Starting in 1956, Maria's son, Popovi Da, began collaborating with his mom on her pottery, and the two worked together until his death in 1971. It was his intent to assist his mother and not to take away from her attention that kept him from making much pottery on his own. It is rare to find pieces signed solely “Popovi”, without Maria's name too. According to Spivey, the first piece of pottery made solely by Popovi and signed only with his name appeared in 1962.  Anita, Popovi's wife, said that Popovi would have made more pottery if he had had more time, but he was a pueblo governor, a leader of the tribe, a father, was running a store at the pueblo and painting pottery for his mom.  He also dug clay for his mom when Adam was not available.

Condition: excellent condition, a few very small abrasions, none of which penetrate the slip

Provenance: this Polished Blackware Jar by Maria and Popovi is from a private California collection

Reference: The Legacy of Maria Poveka Martinez by Richard Spivey