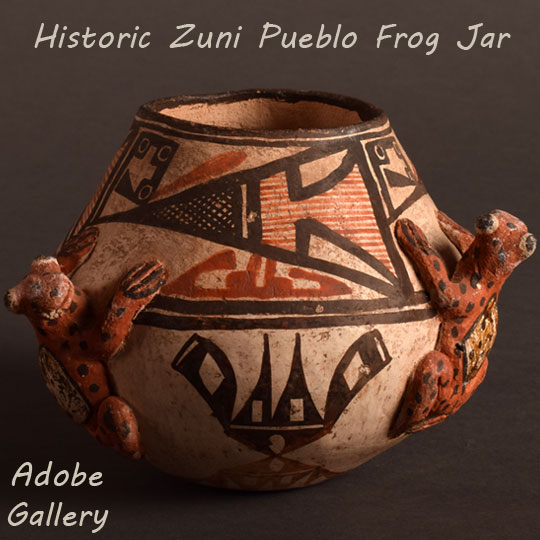 A look at the designs painted on the historic pottery jar, overlooking the frogs for a moment, reveals very traditional Zuni Pueblo OLLA designs.  The dagger design on the neck is outlined with wide brown pigment and filled with parallel red lines and a checkerboard tip. The dagger has a long bird-like beak that ends in a squared-off element with three circular eyes.   According to Zuni informants, the dagger represents “the thunder knife which priests use in many ceremonies.” [Lanmon & Harlow 2008:171]  The body design is a brown pigment element in mirror imagery.

There are three frogs climbing up the wall of the jar.  Each of the three has its head looking off to the right.  Most often, they are fashioned with heads looking straight at the jar.  The potter in this case chose to be creative.

It appears that the white circles with black dots on the frog’s backs have been coated with a green substance. Informants have stated that this is a liquid residue from boiling evergreen boughs and its use signifies the jar was intended for ceremonial purposes. Once the ceremony is completed, the jar no longer qualifies as a ceremonial object but is a secular object available for sale.

Pottery has always been a useful art form at the pueblos. Some pieces were made for utilitarian uses in everyday life chores and other pieces made for ceremonial purposes. Some even served both purposes. Designs on these pots were not arbitrary but had meaning.

Cushing, Stevenson, and Bunzel conducted several major studies of the symbolism of Zuni pottery designs. Although symbolism may be questionable in some pueblos, there is universal agreement among the Zuni informants to Cushing and Stevenson in the 1880s to 1890s and to Bunzel in the 1920s, that all designs on pottery are meaningful.

In an arid land such as New Mexico, it is understandable that efforts to control rain and secure moisture for crops were major concerns for the pueblo farmers. Therefore, water symbols and animals responsible for bringing rain were predominant symbols on pottery. Tadpoles, dragonflies, and frogs associated with early-, mid-, and late-summer rains are commonly found on pottery.

Jars such as this small one were frequently made for home use as a repository for sacred corn meal that was a necessity in daily home ceremonies or prayers. Sometimes, they were made for sale, as well.

This small jar does not indicate excessive wear from use. Interestingly, the frogs are in excellent condition. Quite often the frog’s heads have been broken off and restored in some manner; however, that is not the case here.

Condition: The Small Polychrome Historic Zuni Pueblo Frog Pottery Jar, circa 1920s is in marvelous condition. It is approximately a century old.

Provenance: Received from a client from Indiana in 2010, sold to a client in Texas, now back to us to sell again.