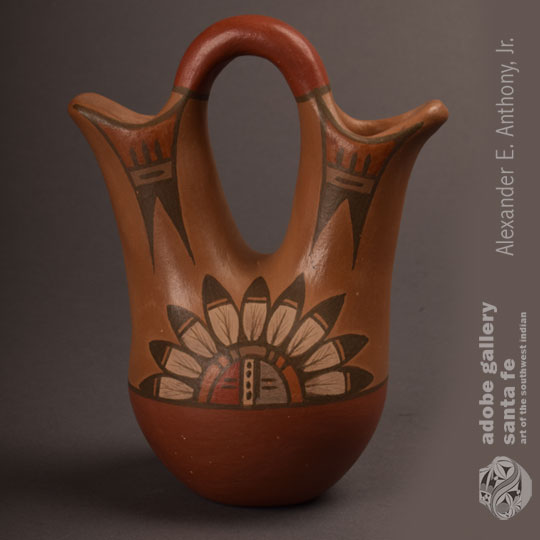 It is often thought that the wedding vessel was a creation by potters to satisfy a tourist market but Teresita Naranjo of Santa Clara Pueblo stated that they were actually used in the pueblo, although she was not aware that they had been used since around 1935. There were similar vessels in prehistoric Southwest pottery and in pre-Columbian wares of Central and South American tribes. Whether those were used in wedding ceremonies is not known.

This Polychrome pottery wedding vessel was executed in the traditional manner of Lela and Van Gutierrez with the design executed in multiple colors of natural materials. There is a half sun face on both sides of the vessel. The sun rays are rendered as feathers.

Lela Naranjo Gutierrez (1895-1966) and her husband Van (c1870-1956) tested many ideas in pottery making, but only when they developed a decorative scheme featuring earth colors on a matte background did they achieve one, which was an enduring success. Bold curvilinear designs on neutral tan or beige became the base for a new Santa Clara style.

Condition: very good condition with one small divot near the rim of one neck of the vessel.

Recommended Reading and Reference: Pueblo Pottery of the New Mexico Indians: Ever Constant, Ever Changing by Betty Toulouse

Provenance: this Santa Clara Pueblo Polychrome Pottery Wedding Vessel with Sun Face by Lela and Van Gutierrez is from the collection of a family from Alexandria, Virginia