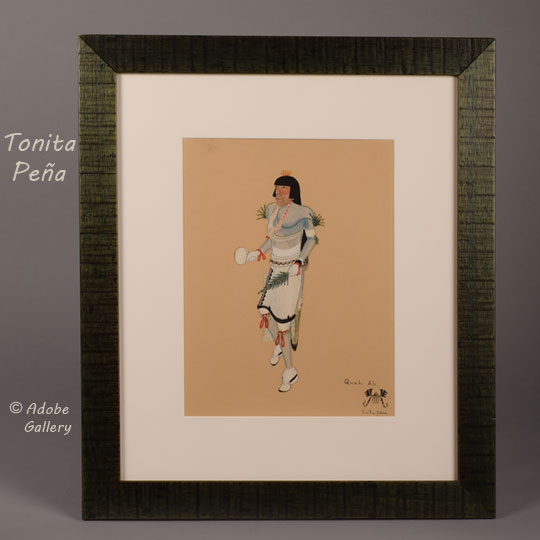 This excellent single-figure painting was made by Tonita Peña, Quah Ah, of San Ildefonso Pueblo. Most of Tonita Peña's works focus on ceremonial dance scenes; we've only seen a few that explored other subjects. What's interesting is the way that each of these many dance scenes has its own unique character. Tonita Peña depicted her figures in a particularly sensitive manner, and this piece is a fine example of her talent.

Tonita Peña directed her eye toward a single male dancer for this piece, which allowed her to focus on the details of the man, his regalia, and his paraphernalia. He's not depicted in profile or head-on, but somewhere in between—an excellent viewpoint for those who appreciate the details. The man is more lifelike and closer to three-dimensional than those we'd usually see in an early pueblo piece. Tonita Peña's subjects' faces are always a treat, but this example is especially strong. He's warm, appealing, and full of personality. This is a wonderful example of Tonita Peña's work. The painting is signed Quah Ah Tonita Peña and marked with a storm motif, which allows us to date the piece to the 1930s or 1940s.

Tonita Peña (1893-1949) Quah Ah was born in 1893 at the small New Mexico pueblo of San Ildefonso. The pueblo is located on the Rio Grande, just north of Santa Fe. When Tonita Peña was just twelve years old, her mother passed away. Her father, unable to raise her while tending to his responsibilities at the pueblo, took her to live with her aunt and uncle at Cochiti Pueblo. This was where she would spend the remainder of her life. Tonita Peña was the only woman in the group of talented early pueblo artists referred to as The San Ildefonso Self-Taught Group, which included such noted artists as Julian Martinez, Alfonso Roybal, Abel Sanchez, Crescencio Martinez, and Encarnación Peña. These artists were the earliest known pueblo painters. Today, their works are highly collectible because of both historical significance and quality.