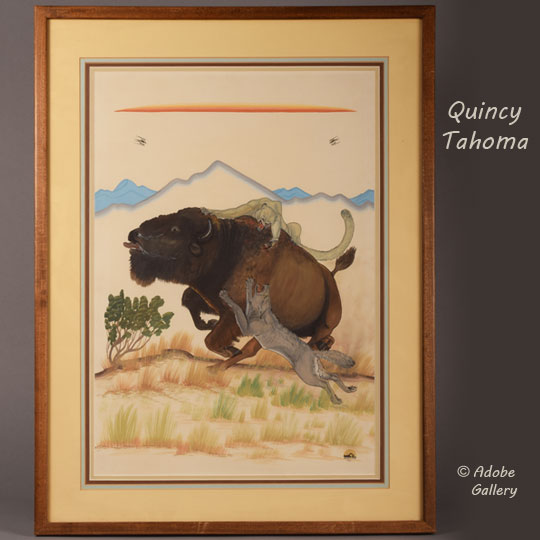 This original painting was created in 1950 by Diné of the Navajo Nation painter Quincy Tahoma. With this impressive painting, Tahoma offers a thrilling hunt scene featuring a buffalo, a mountain lion, and a wolf. The buffalo occupies much of the image, kicking up dust while attempting to escape. The mountain lion clings to the buffalo's back, looking down and swiping a paw at the leaping wolf. A serene mountain landscape, birds, and warm orange clouds appear in the background, contrasting the rowdy foreground scene and bringing the image into balance.

Tahoma was a highly skilled painter with a keen eye for action. Here, he created highly detailed figures with much to offer in the way of depth and texture. Strong linework and thoughtful application of hazy, earth-toned watercolors resulted in figures that look incredibly realistic. This is an excellent example of Quincy Tahoma's work.

The painting is signed and dated Tahoma ‘50 in lower right. As is common for a Tahoma painting, a small illustration above the signature shows what happens after that which is depicted in the painting. In this case, the buffalo lies on the ground as the wolf and mountain lion continue to grapple with each other.

Quincy Tahoma (1917-1956) Water Edge (Near Water) was an influential Diné painter who lived a short life but made a significant impression in the world of Native art. Dorothy Dunn praised his talents in her book American Indian Painting of the Southwest and Plains Areas: "Tohoma's [sic] style changed from serenity to one expressive of near violence—from quiet, pastoral scenes and orderly ceremonial patterns to highly agitated portrayals of animals, hunts, and battles that glorified struggle and cruelty. Yet it is the latter work for which he is most recognized, and which extends his natural powers of draftsmanship and imagination. Through his individual studies of foreshortening and anatomy, Tohoma [sic] won for his pictures high praise from academically trained artists of note, and the admiring response of the public. Whatever one may think of these later paintings as Indian art, he must recognize the command of techniques and devices of the artist's own making which convey the opposition and impact of brutal contests in all sorts of situations on the hunting ranges of the old days." Tahoma passed away in 1956, at just 39 years of age.

Provenance: this Quincy Tahoma Original Painting of Mountain Lion, Wolf, and Buffalo is from a private collection

Reference: American Indian Painting of the Southwest and Plains Areas by Dorothy Dunn

Recommended Reading: Quincy Tahoma, The Life and Legacy of a Navajo Artist by Charnell Havens and Vera Marie Badertscher