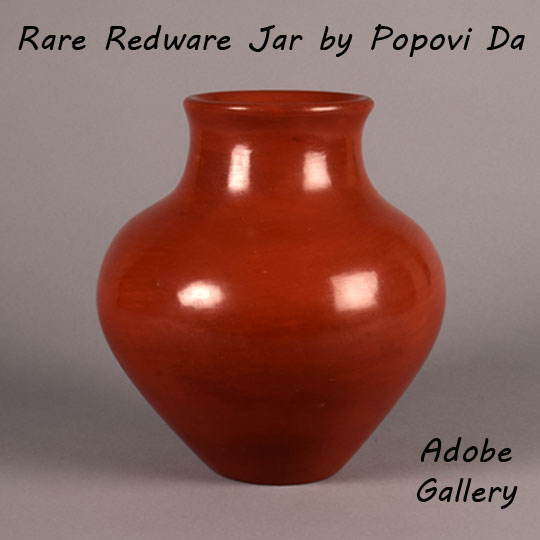 This redware jar was made in 1971 by San Ildefonso Pueblo artist Popovi Da.  The acquisition of Popovi pottery is always exciting, but this redware piece is a particularly rare treat.  Not much of his work is available on the market, and the majority of that which is available is blackware. Rarity is exciting, but beauty is most important, and this piece is every bit as attractive as it is uncommon.

The jar’s form is undeniably beautiful.  It begins with a contemporary spin on the pueblo olla—the notable modification being the near-perfect shape of the shoulder and midbody, which would be a bit more looser and rougher on a functional piece.  Da further expanded on the traditional pueblo form with the addition of a tall, wide neck, with a rim that turns slightly outward.

Its polished exterior has no carved or painted designs, which allows its deep, seductive red tone ample space in which to shine.  With no design or detail to serve as a focal point, the viewer can see the piece through a wider lens, absorbing its beauty in a manner that might not be possible with a more intricate offering.  This jar is a stunner from any distance and any angle, which speaks to the incredible skill of the man who created it. The bottom of the jar is signed Popovi and dated 471, which signifies April of 1971.

Condition: very good condition with some light spalling, which has been corrected by a restoration artist

Provenance: this Rare Redware Pottery Jar by Popovi Da is from a private New Mexico collection