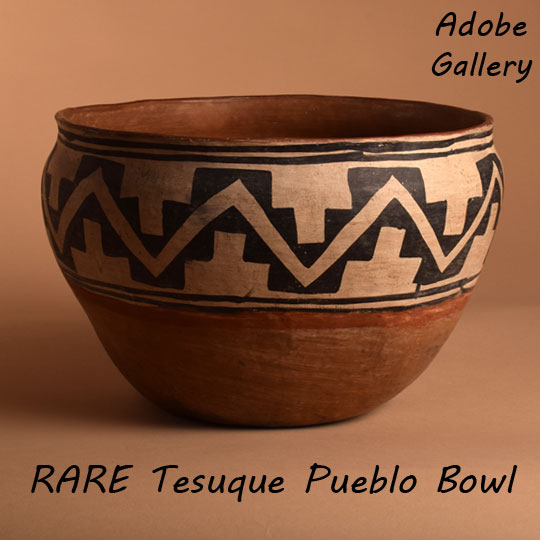 This rare Tesuque Pueblo pottery dough bowl dates from the mid- to late-nineteenth century, probably circa 1870s.  It has design elements in black on a white slip without any red in the design, but the rim is red.  The only other red is the traditional wiped-on red band below the design panel.

The white slip appears to be stone polished, which was traditional at Tesuque to as late as 1940, whereas San Ildefonso had switched to the rag-wiped bentonite slip from Cochiti, abandoning the stone-polished slip that was traditional at the time.

Another clue to the origin of Tesuque is the bumpiness of the polish on the unslipped tan underbody.  This bumpy polish is another distinguishing characteristic between Tesuque and San Ildefonso pottery of the period.  Still yet another clue to Tesuque is the continuous zig zag black stepped design around the body of the bowl, or, if one chose, the white zigzag band that overlays the black stepped elements.  A continuous and uninterrupted design encompassing the whole vessel is typical of nineteenth century pottery.

The design panel is framed by paired framing lines above and below.  There are no ceremonial line breaks in the framing lines.  The interior is unslipped and undecorated natural stone polished clay.

Condition: there are some cracks on the interior and exterior but they have been professionally stabilized without concealing them.  The bowl is, however, very stable.

Provenance: this RARE Historic Tesuque Pueblo Black on White Pottery Dough Bowl is from the collection of a gentleman from Colorado

Reference: Pottery of the Pueblos of New Mexico 1700-1940, The Taylor Museum of the Colorado Springs Fine Arts Center, authored by Jonathan Batkin