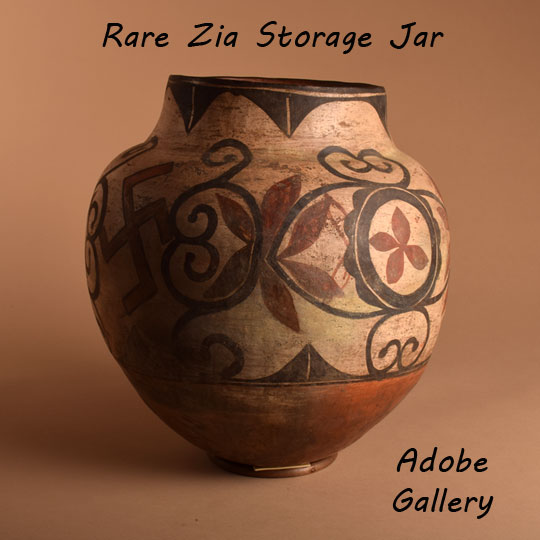 Native American tribes traditionally used symbolism in their arts and crafts—jewelry, basketry, pottery, textiles—that had specific meaning to them and they also used symbols that were purely decorative.  One such symbol often seen on pre-1930 Apache baskets, Navajo jewelry and rugs, and, occasionally, Pueblo pottery, was the symbol internationally known as the swastika. It is a symbol that had been in use for several thousand years in cultures over the world.  What meaning it had for Native Americans has only been thoroughly documented in its use on Navajo rugs.  Dennis J. Aigner has studied the symbol for several decades and has published The Swastika Symbol in Navajo Textiles.  Its use by the Navajo originated with a Navajo sandpainting used in The Nightway Chant, a nine-day ceremony for healing purposes.  The symbol consisted of what may be called a plus mark, with The Twin War Gods, side by side, attached to the four lines, forming a swastika-looking symbol.  Legend has the twins riding down the river on logs, rotating or whirling, thus the accepted name for the symbol being Whirling Logs.  Unfortunately, there is no published documentation on the origin of its use by other tribes. 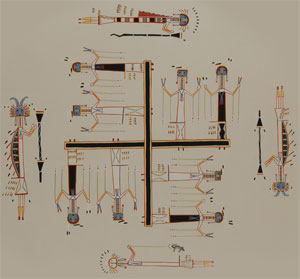 The swastika symbol is an innocent symbol.  It was its use by Hitler that made it a dirty and poisonous symbol.  It is doubtful that it will ever again be a positive symbol, but we must not condemn its prior use by Native American tribes.  Its use in various crafts ceased in the 1930s.  Thousands of years of positive use has been denigrated by the Nazi use of the symbol.

Now, for a description of this Zia jar and its design elements.  There is a Zia storage jar in the Denver Art Museum collection with bold swastika symbols featured as the major design elements of the jar.  It has been dated circa 1900.  It appears in photographs in Fig. 7.2 and 7.3, page 124, in The Pottery of Zia Pueblo, 2003.  Now, here is a second jar of very similar design and it is from The Gallegos Collection and published in Plate 46 in Two Hundred Years of Pueblo Pottery.  The two are so similar, they were undoubtedly painted by the same potter.  It is comforting that the Denver Art Museum one is dated at circa 1900, and Gallegos Collection one at 1890, making it likely the same potter could have made both, separated by a decade.

These two documented Zia jars are too similar in design to have been painted by different potters.  There is little doubt that the same potter made both.  The jars are small for storage jars but large for water jars.  The bottoms of the vessels are rounded (convex) which is typical for storage jars.  If there is a one-inch wiped on red band under the design area, it is too weak to see.  The swastika design on the Denver Art Museum jar rotates in a different direction than those on this jar, an indication that directional rotation was not important in its use on pottery.

This is a rare jar and one that can quite accurately be attributed to the same potter, unknown by name, but the one who made the other known example in the Denver Art Museum.

Condition:  this Rare Zia Pueblo Pottery Storage Jar with Whirling Log Design, circa 1890 is structurally in very good condition.  It appears that a lateral crack existed about 1/3rd down from the rim and circumnavigated around a portion of the jar.  It has been stabilized and over-painted so that the jar appears in excellent condition for its age.

Provenance:  previously from The Gallegos Collection, 1990