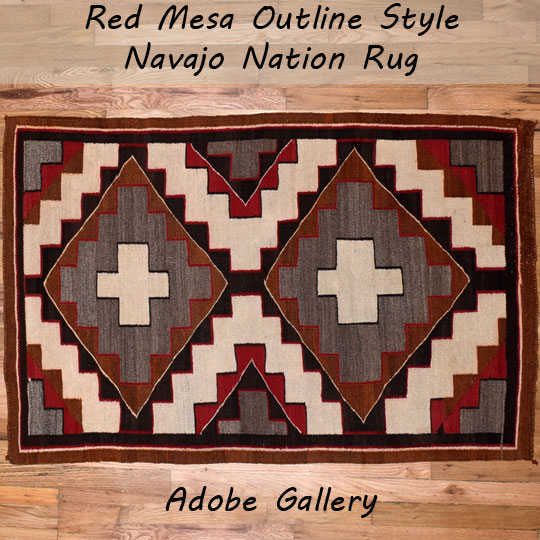 One normally expects rugs from the Red Mesa area of the Navajo Reservation to be eyedazzler style, with small design elements outlined with thin lines.  This weaver followed the style by outlining each color to separate it from its adjoining color, however, she enlarged the design elements to make them bold rather than busy.  This dates to c.1920s.

Bold is a very correct description for this textile.  It has two large diamond designs in the center, each one hosting a large white cross or plus sign. The white is separated from the grey field by black outlining.  Sharing the diamond is a stepped design attached to the diamond’s walls.  Again, as expected, the dark orange stepped designs are separated from the grey field by a continuous red line.

Surrounding the two large diamonds are six stepped design patterns.  At the four corners of the textile, the arrangement is a grey element, outlined in black, a red and dark orange stepped element with no outline color, and a white stepped item separated by the adjoining black one with a red outline.  The two large designs in the middle of the longest sides of the textile, start with a black triangle holding within itself a grey step design and red outlining between the two colors.  Along the sides of the triangle is a red stepped element, black outlining, white stepped element, red outlining, merging into the black that connects it to its neighboring design on the opposite side of the textile.

The rug has four borders—the outer one is dark orange, next is a thin while one, then a thin red one, and finally a black one as the inner border.  In one corner of the rug, the weaver placed a weaver’s pathway line traversing from the grey stepped element through the three inner borders to the black outer border.

In the corner of the rug that contains a weaver’s pathway line, the weaver deliberately or mistakenly made changes in the dark orange and red stepped designs, by switching yarn from dark orange to red at the point of the last step of the design.  Was it an error or a deliberate act?  We do not and we will not ever know her intent.  That is the charm in such a textile.  It leads one to constantly question but with no answer coming forth.

Provenance: this Red Mesa Outline Style Navajo Nation Textile is from the collection of a gentleman from California

Recommended Reading: SOUTHWEST TEXTILES Weavings of the Navajo and Pueblo by Kathleen Whitaker