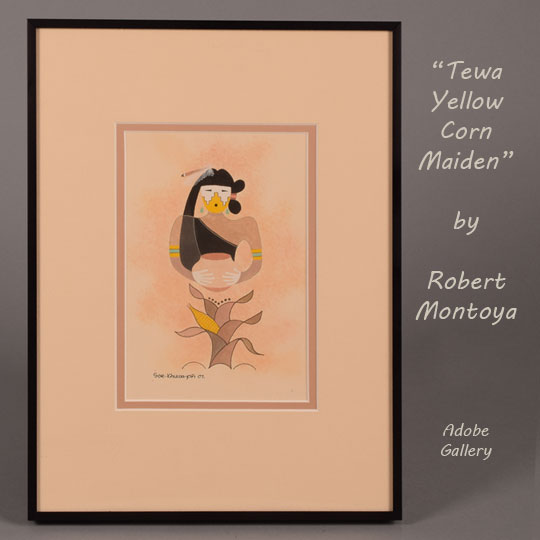 “Tewa Yellow Corn Maiden” is an original painting by Robert Montoya, an artist and architect with roots at Sandia and Ohkay Owingeh Pueblos. As the son of artist and educator Gerónima Cruz Montoya, Robert was born into an atmosphere of creativity, which must have contributed to the development of his unique style. The pieces we’ve handled over the years have presented traditional pueblo imagery and symbolism through an expressive, stylish lens.

Montoya’s maiden faces the viewer directly and holds a pueblo olla close to her stomach. Her face is painted with a yellow and white kiva step design. She wears an asymmetrical hairstyle, which falls on one side down to her waist. Down below, a corn plant rises from a trio of semicircular lines. A wispy cloud of bright orange appears in the background behind her, giving the viewer the impression that she’s emerging from the colorful fog.

The painting is signed Soe Khuwa Pin and dated ‘07.  It is framed in a thin black frame, under two layers of matting and ultraviolet filtering acrylic.

Robert Montoya (1947-present) Soe Khuwa Pin - Fog Mountain is an artist from Sandia and Ohkay Owingeh Pueblos. Montoya is the son of Gerónima Cruz Montoya and brother of Paul Montoya. In addition to his visual arts work, he has also had a career as an architect. His education included high school at St. Michael's in Santa Fe, an undergraduate degree in architecture from the University of New Mexico and an MA from the University of Oklahoma. Montoya combines traditional and contemporary styles in his work. He has received many notable awards and accolades, including "Best of Show" at Santa Fe Indian Market in 1973.