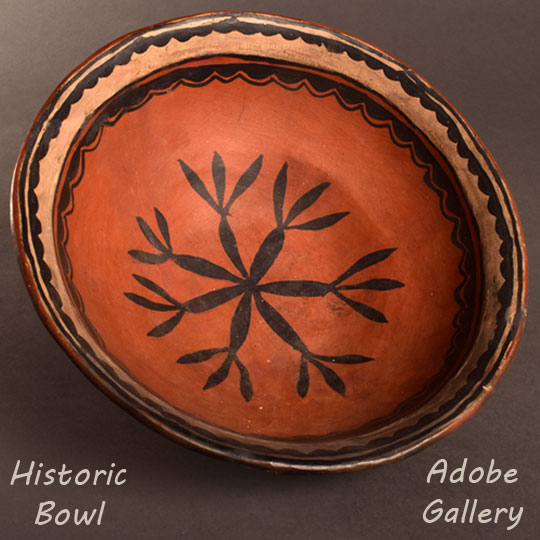 This is a most unusual historic pottery bowl from San Ildefonso Pueblo.  The interior was slipped in red, the interior rim was slipped in white, and the design was executed in black.  This combination of design and color was used by Maria Martinez on occasion.

There are two vessels by Maria Martinez in the Museum of New Mexico collection (18798/12 and 36005/12), one of which is signed with her name Poh’ve’ka.  In the first one, a jar, the upper neck—the full area above the shoulder—is decorated with  Black-on-red, and the lower portion— the body of the vessel—is decorated in polychrome colors on white slip. The other vessel mentioned is a terrace rim bowl, with the exterior in black on red and the interior in traditional San Ildefonso Polychrome, both vessels being dated circa 1925.

It is not our intention to state or infer that this bowl was made by Maria and painted by Julian, only that they are known for having done similar styles.

The rim of the red slip on the interior is decorated with black half-circles, outlined in a black half circle line, both representing cloud formations.  The white slip on the rim is also decorated with half circles representing cloud formations. The design on the interior of the bowl is perhaps a plant. The clay body of the exterior of the bowl was stone polished and left in its natural state with no decorations.  The designs are rather simple, yet, the bowl is strikingly beautiful in the contrast and mixture of slips and pigment.

Condition:  this bowl was broken in four sections and professionally reassembled.  The lines of breakage have been left visible on the exterior but have been overpainted on the interior.

Provenance: this Historic San Ildefonso Pueblo Black Design on Red and White Pottery Serving Bowl is from the extensive Southwest Indian Pottery collection of a family from Colorado

Reference: the two Maria Martinez vessels mentioned above are shown in Modern Pueblo Pottery 1880-1960 by Francis H. Harlow, on page 37.