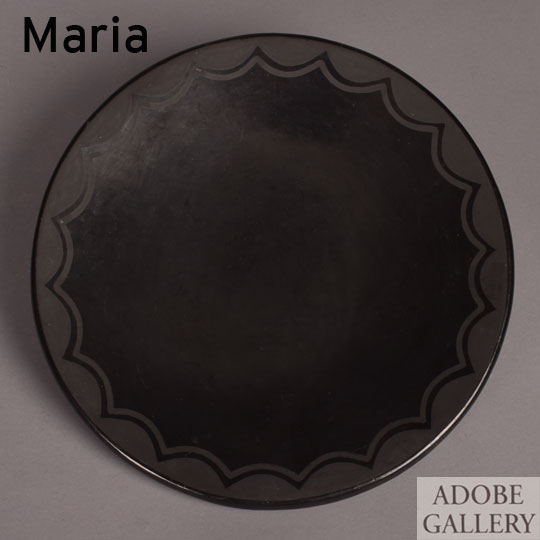 Maria Martinez used a variety of signatures during her long career.  The first signature on black pottery was Marie—a signature used when she made the item and Julian painted the design.  His name was omitted in the early years because pottery was considered “woman’s work.”  It was only after they were convinced that his painting did not constitute doing “woman’s work,” but was the work of an artist, that his name was confidently added alongside Maria’s.  The Marie signature was used between 1923 and 1925. Spivey 2003

This pottery plate is signed into the clay with the name Marie.  It is accepted then that Maria made the plate and Julian painted it between 1923 and 1925.  The plate is polished on front and back to a high luster. A simple ring of clouds outlines the edge of the plate.  Julian was most creative with designs early in their shared career. This plate would constitute some of the earliest blackware of this talented couple from San Ildefonso Pueblo.

Maria Martinez has been elevated in the minds of the white culture to the level of an artist of profound talent and shadowed with awards and accolades beyond what she would have wished. She was, first of all, a Tewa Indian and only one among many other Tewa women and she did not seek individual praise. The concept of individual recognition was foreign to pueblo culture. Individuals did not excel but the group excelled. The pueblo worked together to achieve what it needed.

Maria, as an excellent potter, could not escape the national attention bestowed on her, but she took advantage of it to uplift the others in the pueblo. She shared her knowledge of pottery production with other potters, she gave to others in need. She shared. I have read, but do not recall the reference, that she paid to have electricity installed at the pueblo. Maria had little material wealth but she shared what she had. She lost a husband and three of her four sons, but she overcame the grief and continued her work. She was a pueblo woman-nothing more, nothing less.

Provenance: from the collection of a gentleman from Thousands Oaks, California