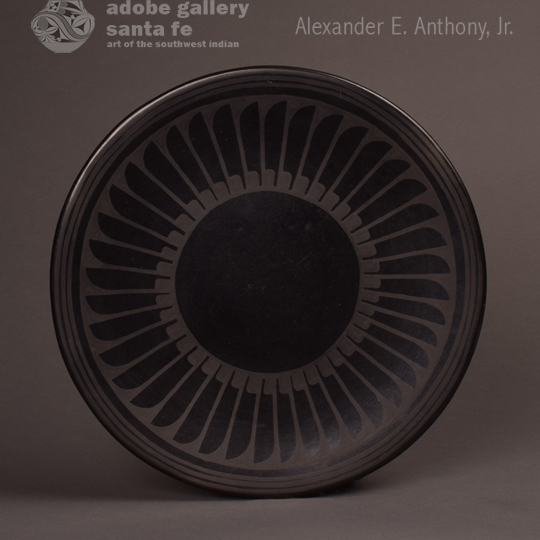 “After Julian’s death in 1943, Maria began working with Adam’s wife, Santana Martinez.  Maria made the pottery and Santana painted the designs. Artistically, the Marie and Santana period is an extension of the late Marie and Julian period, as the same type and style of pottery (Black-on-black and occasional Buff-on-red or Polished red) continued to be produced, although with less emphasis on larger pieces.

“Santana came from an impressive background.  Her brother was Awa Tsireh (Alfonso Roybal), considered by many critics to be the most talented of all Pueblo artists, and her mother was Alfonsita Martinez Roybal, an accomplished potter.  Her uncle, Crescencio Martinez, was San Ildefonso’s first painter, one of its most gifted artists, and a pottery decorator; his wife was Maria’s oldest sister, Maximiliana. Her aunt, Tonita Martinez Roybal, was generally considered Maria’s closest competitor in pottery making, and her grandmother, Domingita Pino Martinez, was also one of San Ildefonso’s better potters, known for her superior Black-on-red ware.” Spivey 2003 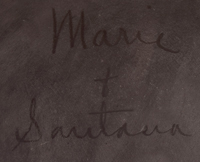 This Black-on-black plate, with an eagle feather design—a design Julian reintroduced from that used by the Mimbres culture a thousand years earlier— has the signatures Marie + Santana so we can state that it dates from the mid-1940s to the mid-1950s.

Condition: there is a half-inch slip crack at the rim (see below), otherwise good condition. There are minor divots in the clay resulting from the original stone polishing efforts. This is not considered a fault or damage.

Provenance: this San Ildefonso Black-on-Black Pottery Plate with Eagle Feather Design signed Marie and Santana is the collection of a family from Oregon