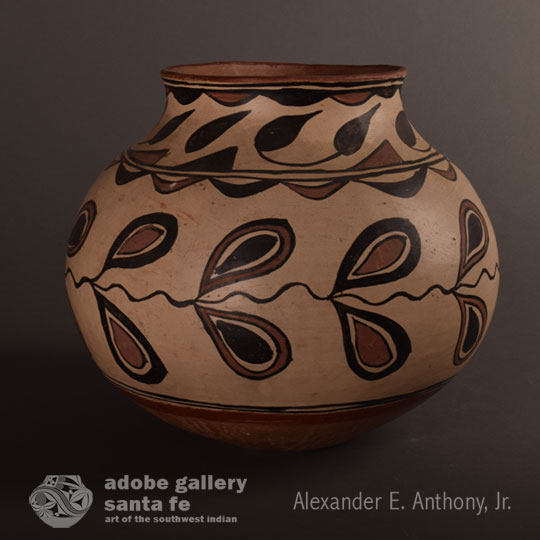 San Ildefonso Pueblo artist Marianita Roybal is the earliest potter identified by name. Jonathan Batkin states that she was an important potter until at least 1910. She was identified and listed in the 1850 U. S. Census Report. It is obvious that only the best potter and best painter of the time could have achieved such a result. The maker of this OLLA has been attributed as Marianita Roybal.

This jar is globular in shape, like Powhoge Polychrome, with the addition of a rolled-out rim, a shape seen in early San Ildefonso Polychrome. The cream slip was stone polished, the slip used before potters changed to Cochiti slip around 1905, which did not require stone polishing. The black vegetal paint and the red paint used in the design of this jar are very strong and bold. The deep red paint seen in San Ildefonso pottery is the same paint used by the men for body decoration. The lighter red, almost orange, seen on later pottery is from another clay source. It is estimated that this jar dates to circa 1890 or maybe a decade earlier.

The jar is truly magnificent in construction and design. The design is quite unique for the period. The undulating string around the mid body anchors the attached oval designs. It is interesting to see the alternating use of color for those elements-a design concept seen by Marianita Roybal and used by Florentino Montoya, too. We see this alternating color use on the semicircle band at the rim, on the semicircle band on the shoulder and again on the floating objects on the body design. There are double black framing lines at the rim, on the shoulder, and below the design panel, none of which feature ceremonial line breaks. The half-inch-wide red band below the design panel is typical of the period. The red rim is typical of the pre-1900 period as well.

Long before Black-on-black pottery became the staple at San Ildefonso Pueblo, potters there had produced a variety of historic pottery types: Black-on-cream, Black-on-red and Polychrome types predominantly. Powhoge Polychrome, which was black-on-cream, in the 1850-1880 period, gave way to San Ildefonso Polychrome, starting in the 1890s, in which red paint was added to the design. Concurrently, some potters began abandoning the red paint on the rim in favor of black, around the same time.

Provenance: from the extensive Southwest Indian Pottery collection of a family from Colorado

Reference and Recommended Reading:  Pottery of the Pueblos of New Mexico 1700-1940 by Jonathan Batkin.