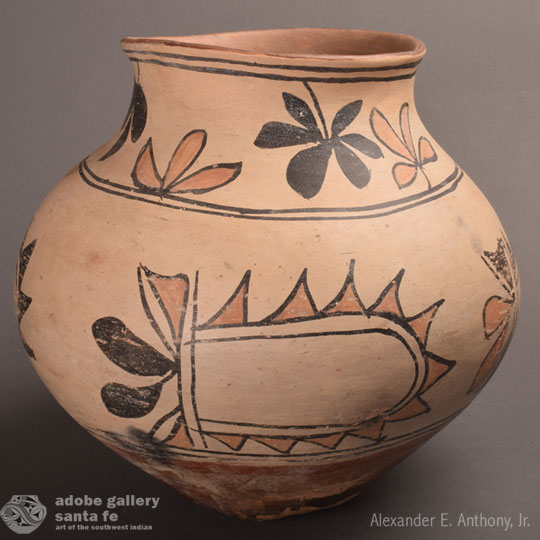 This Historic San Ildefonso Nineteenth Century Polychrome jar is a typical late nineteenth century Tewa vessel-shaped water jar. The rounded, globular body is distinctive of the period. The red rim slip was characteristic of the late nineteenth century but was replaced by black in the early twentieth century. This water jar has two more attributes seen on pre-1900 vessels: a red underbody band and an un-slipped, polished base.

The body of the jar is a little off-center and the rim is slightly irregular, that is, it is not symmetrically round. The orange design elements on the neck and body are outlined in black. There are three pairs of framing lines—one at the rim, one at the base of the neck and one near the end of the white slip at the base. The designs are wonderfully loose in structure. There are four design elements on the body, all similar and complimentary, but not the same.

The jar is beautifully primitive in a desirable manner. It plants a picture in our mind of an older potter from whom this might have been a little too ambitious an effort to undertake, but she did because that is what potters did at that time. They made pottery for use in their home and for sale as a means of bringing in needed cash. Potters did not generally voluntarily stop making pottery as they aged—it's what they had done all their lives and there was no thought of stopping. It was a way of life. When looking at a jar like this one, one should think of the potter who lovingly labored over it. It is not only a functional object, but a historic one, a work of art, and one to cherish.

Condition: structurally sound but there are abrasions to design areas and some loss of clay on the polished underbody.

Provenance: this Historic San Ildefonso Nineteenth Century Polychrome Pottery OLLA is from the collection of a family in Santa Fe

Recommended Reading:  Pottery of the Pueblos of New Mexico 1700-1940 by Jonathan Batkin.