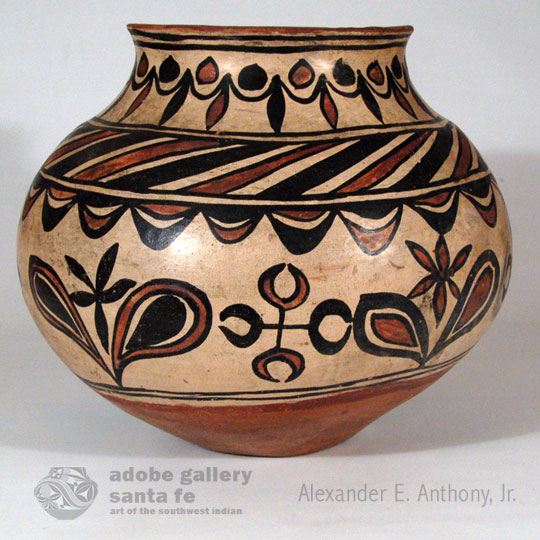 This historic pottery jar is an old friend who has returned to the gallery.  We sold it in 1999 to a client to whom we stated that it was attributed to Marianita Roybal of San Ildefonso Pueblo.  Marianita was an active potter from about 1860 to 1910. “Her jars were mostly with orange rims, designs around the neck, and a principal design of repeated forms around the middle.  Her bases were often orange. Her jars, in the 1880s, were rounded with a ‘full belly’ and graceful, short necked rims. Her later jars would become more compressed with the belly of the jars pushed down and the necks more elongated.”    - Schaaf 2000

Marianita collaborated with different pottery painters—Maximiliana “Anna” Montoya, elder sister of Maria Martinez; Crescencio Martinez (1879-1918); Marianita’s son, Ignacio Roybal; and her grandson, Joe Aguilar.  There may have been others, such as Florentino Montoya (1858-1918).

The painting techniques of the design on this jar are highly reminiscent of pottery painted by Florentino Montoya, who painted for his wife, Martina Vigil (1856-1916) and, occasionally, painted pottery for Martina’s mother, Toña Peña Vigil.

The technique of alternating colors, such as black outlined in red and red outlined in black, was a favorite one of Florentino.  It has been documented on numerous vessels painted by him. The ribbon design on the neck is typical in its alternating colors. A similar treatment of the slanted bars on the neck and the designs on the body follow the same pattern.  The jar dates to circa 1890, a time consistent to when Florentino was painting pottery.

Provenance: from a collector to whom we sold this jar in 1999. 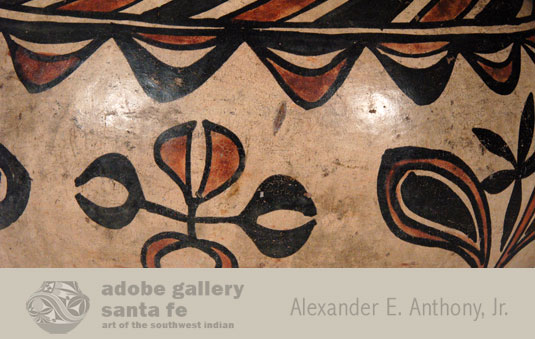