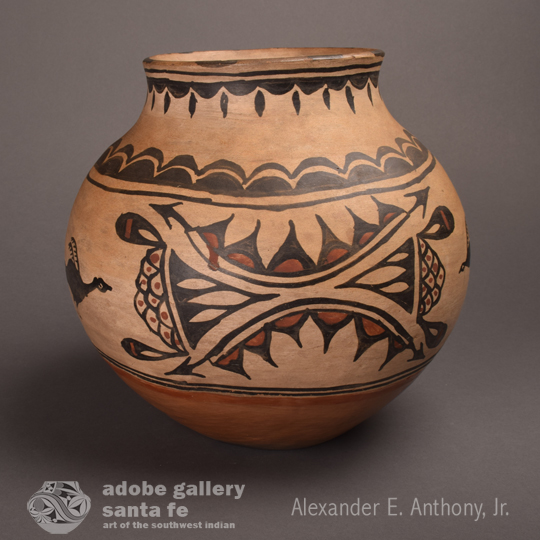 San Ildefonso potters were accustomed to using a cream slip on pottery which required stone polishing.  That is the way it had always been done. Because Martina Vigil (1856-1916) and Florentino Montoya (1858-1918) frequently visited Cochiti Pueblo, they became aware of bentonite slip being used by those potters, which did not require stone polishing.  They brought that discovery back to San Ildefonso and the potters then benefited greatly from their efforts. By 1920, most San Ildefonso potters were using bentonite slip.

The entire upper part of this vessel has an application of Cochiti rag-wiped bentonite slip. This and the red band at the lower end of the slip are indicative of a piece dating to after 1905.  Around 1900, potters began abandoning the use of red slip on the rim in favor of black. This jar has bands of black on the rim. The rim also has a band of clay extending inward. This is indicative of a jar having had a lid at one time, however there are no abrasions on the lip as would be expected if there had been a lid. Perhaps the lid was destroyed during firing and was never placed on the jar.

The extraordinary design concept combines traditional Tewa designs of bold elements and humorous ones.  A pair of strong designs can best be described as mirror image curved lines with arrowhead ends. Resting on these lines are black peaked elements with red hemisphere centers.  Tucked into the edges of these curved arrows are billowing clouds and rain. One set of stacked clouds is red, outlined in black, and the other set has red dots, outlined in black.

On opposing sides, arranged between the pair of designs mentioned above, are humorous birds in flight. Three are black birds and the fourth one is outlined in black with its stomach full of seeds. All four have their wings flapping as if in flight.

Condition: structurally in excellent condition .  There is one firecloud below one of the black birds.

Provenance: this San Ildefonso Polychrome Pictorial OLLA is from the extensive pottery collection of a gentleman from Santa Fe

Reference and Recommended Reading: Pottery of the Pueblos of New Mexico 1700-1940 by Jonathan Batkin