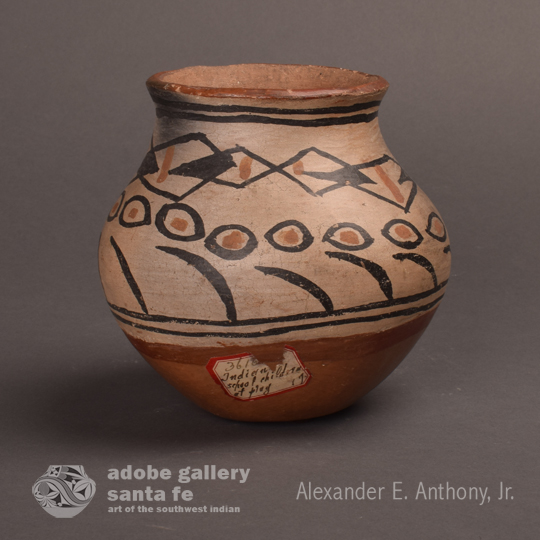 This Historic Pottery Polychrome Small Jar from San Ildefonso Pueblo is hand coiled, stone polished, and painted by a skilled artisan.  The watery red paint is prior to 1905 and the red rim is 1895 to 1910.

This jar has a paper label attached that reads "Indian School Children at Play," executed in beautiful cursive handwriting. Is this an early pictorial jar? Are the black circles, each with a red center, meant to be the children? Was that comment made by a merchant creating a story to make the jar more interesting to a buyer? This is an interesting sideline to the jar but more importantly is that the jar is a little jewel from that Tewa-speaking pueblo. It was beautifully constructed with a nice shape and decorated with imagination.

When San Ildefonso Polychrome became a specified pottery type in the 1890s, it did so because red design paint was revived, a change from the previous designated Powhoge Polychrome. This was a revival of a style from the 18th century. At first it appears that black paint was fired on and red paint applied after firing. Around 1910 or a little earlier, the red was also fired on. In some cases, the red on these early ones was watery.

Another change that occurred in the early 1900s at San Ildefonso was brought on by Martina Vigil and Florentino Montoya, a husband and wife pottery team who visited Cochiti Pueblo frequently. They became aware of the bentonite slip being used at Cochiti that did not need to be stone polished, only rag wiped. San Ildefonso slip required stone polishing. Martina and Florentino shared this knowledge with San Ildefonso potters and most then switched to the bentonite slip shortly after 1900.

Stone polished slip used at San Ildefonso shows marks from the stone polishing and it tended to craze during firing, producing cracks or crazing akin to a dry river bed. It appears that this jar has the San Ildefonso stone-polished slip with uniform crazing overall. The red paint is slightly watery. These indicate a date prior to 1905. This jar has a red rim, something that began to disappear in favor of black rim between 1895 and 1910.

Provenance: from a collection from Colorado

Reference and Recommended Reading: Pottery of the Pueblos of New Mexico 1700-1940 by Jonathan Batkin.