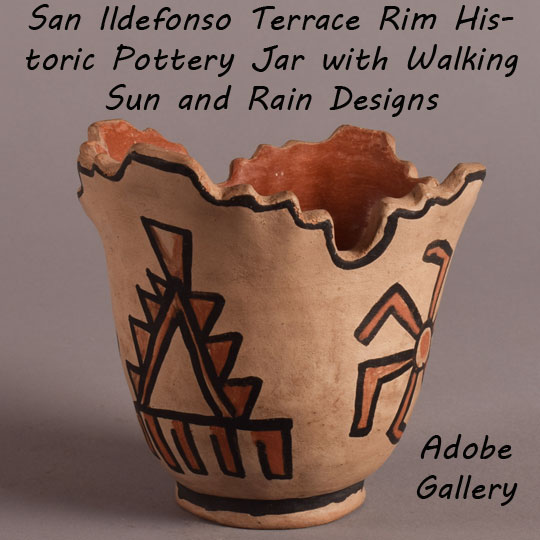 The surprising design is that of the other two matching elements. It is a six-legged wheel with extensions at their ends. This has been described as "the walking sun." This design was a common one on Anasazi pottery, related to the movement of the sun. There are examples of Anasazi pottery in the Museum of Indian Arts and Culture, Santa Fe, with walking sun designs. There are similar designs on older Navajo baskets. There appears to be a relationship of Ancestral Puebloan pottery designs and Ancestral Navajo basket designs. [Simpson, 2003:24-25]

This small jar is most likely a pseudo-ceremonial vessel, one made for sale and not for true ceremonial use. There is no evidence of prior use of this one and it is probably a twentieth century piece destined for the collector market.

Provenance: this San Ildefonso Terrace Rim Historic Pottery Jar with Walking Sun and Rain Symbology is from a private collection The Anasazi: Prehistoric People of the Four Corners Region
by Richard Ambler

ANASAZI—ANCIENT PEOPLE OF THE ROCK [SOLD]
by