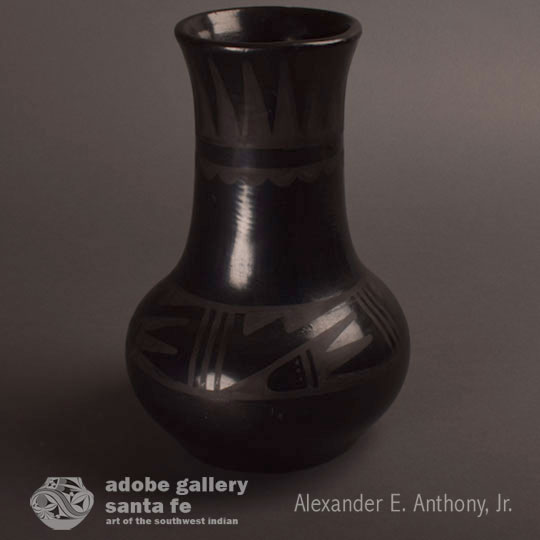 This San Ildefonso Pueblo tall neck pottery jar by Desideria Montoya Sanchez is typical of the style vessel made in the mid-twentieth century.  These were often drilled and converted to lamp bases.  This one has not been drilled, however.  The wide lower body topped by a tall graceful neck imparts a feeling of stability to the vessel.

Desideria (1889-1982) was a sister of Maria Martinez, Maximiliana Montoya, Juanita Vigil, and Clara Montoya.  Desideria was not a prolific potter as she and her sisters worked helping Maria after she became so well known and in demand. The four sisters worked side by side for many years producing pottery.  One can only imagine they chatted and laughed as they worked together all day.

Desideria Montoya Sanchez did demonstrate pottery making at the Museum of New Mexico in 1909 with Ramona Gonzales, Anna Montoya, Maria Martinez and Tonita Roybal.  She was included in Rick Dillingham’s Seven Families in Pueblo Pottery at the Maxwell Museum of the University of New Mexico in 1974.

Condition: this San Ildefonso Pueblo Black-on-black Tall Neck Pottery Jar by Desideria Montoya Sanchez is in very good condition with only minor wear. It appears that it was once used as a flower vase, but no significant damage occurred.

Provenance: originally from The Alan Cameros Collection and now from the client to whom we sold it in 2008.