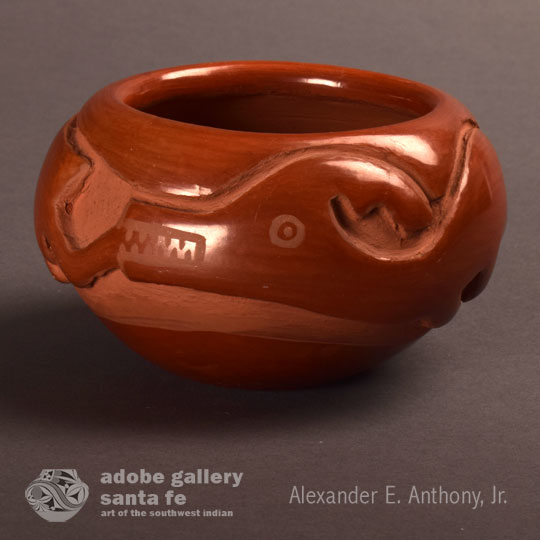 This small redware pottery jar by San Ildefonso potter Blue Corn features an Avanyu water serpent encircling its body.  The Avanyu was outlined by carving the adjoining clay away, leaving it at the same surface level as the area around the rim.  The entire area below the Avanyu was carved away to the level of the outlined clay around the Avanyu. The lower part of this area is slipped and polished, the upper part matches the other carved areas. The entire area of the jar, including the Avanyu, was stone polished to a high luster.  The carved area was painted with a soft red matte finish, as were the mouth and eye of the Avanyu. It’s a very inventive spin on a classic pueblo design. Crucita Gonzales Calabaza (1921-1999) Blue Corn was one of the greatest and most versatile San Ildefonso ceramicists. She made pottery for over 60 years, working in black, red, and polychrome using a variety of forms. Her house was located across the plaza from that of Maria Martinez, but there was no competition between the two artisans. She was one of the most honored of 20th century potters. She received the 1981 New Mexico Governor's Award—New Mexico's highest artistic award—and she was acclaimed for her artistic accomplishments in the Wall Street Journal and AMEPNKA, a Soviet Union journal. She won awards at State Fairs, Indian Market, and other notable exhibition.

Condition: this San Ildefonso Pueblo Carved Redware Pottery Jar with Avanyu by Blue Corn is in good condition, with a few small abrasions

Provenance: from the collection of an East Coast client who is downsizing