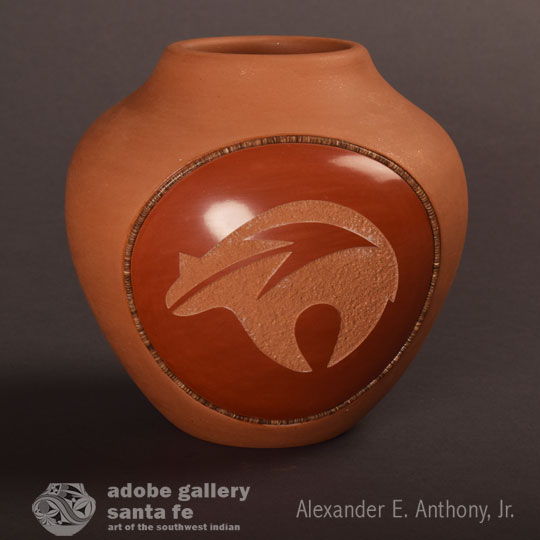 This San Ildefonso Pueblo pottery jar by artist Dora Tse-Pé was made in 1985 and offers clear evidence of the artistic talent of the potter.  Dora Tse-Pé fashioned the jar from a beautiful beige micaceous clay which was finished in smooth polishing. On a medallion, which she carved into a medicine bear image, she applied a red slip which was highly stone polished.  To provide a frame for the medallion, she inserted into the clay, after the jar was fired, a string of shell hieshe.

The beauty of the red polished slip transforms the beige clay to a heightened level of sophistication.  Dora Tse-Pé has always produced dramatic pottery and this is another example of one made over 30 years ago.

Dora Tse-Pé is recognized as a master potter, and was awarded the title Master of Indian Market. She is and has always been a perfectionist in her art career. She achieves a beautifully smooth burnish and an exceptional firing to her pottery.

Dora Tse-Pé (1939- ) was born at Zia Pueblo, the daughter of Candelaria Gachupin and granddaughter of Rosalie Toribio, both of whom “taught her the sacred and spiritual significance of the clay, of Mother Earth, Father Sun, and of the life-giving water.  Her mother and grandmother made sure she understood the importance of these forces in creating pottery. Like Rosalie Aguilar and Rose Gonzales, a generation before, Dora married into San Ildefonso. In 1961, she married Tse-Pé, a fine potter.  His mother was Rose Gonzales, who also had married into San Ildefonso, but from San Juan Pueblo.” -Schaaf 2000