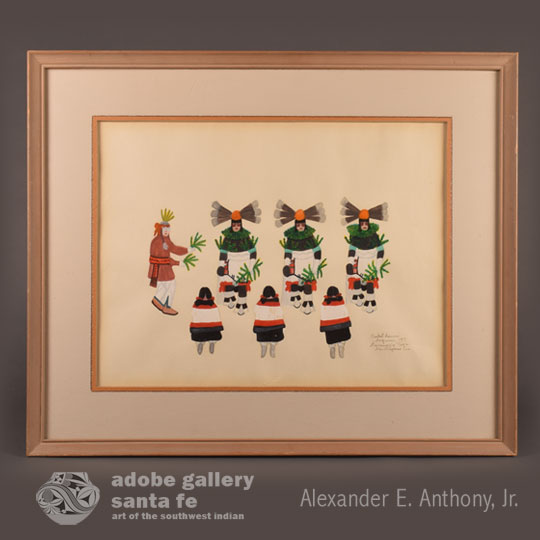 This painting by José Encarnación Peña of San Ildefonso Pueblo features one of the artist’s favorite subjects: a basket dance.  Basket dances are of great significance to the Tewa people. These ceremonies invoke plant growth and pay tribute to the pueblo woman’s ability to create and sustain life.  These dances are about fertility, essentially, and so they are of the utmost importance. As with those that deal with more tangible resources like animals and water, this ceremony both asks for more and gives thanks for that which has already been given.

Peña’s depiction of the basket dance includes seven figures and is particularly spirited.  His unique style is, unsurprisingly, similar in some ways to the other early San Ildefonso painters.  What’s different about Peña’s work is that it’s looser and simpler than that of his peers; he used bold blocks of just a few simple colors to define his subjects. They’re usually positioned facing the viewer directly, which works well with his particular type of figure.  The figures are usually arranged in rows, in some nearly symmetrical or similarly balanced manner. The manas (females) are kneeling in front of and facing the males.  One might not notice immediately, but his images usually have a pleasant rhythm to them. This piece, which is dated 1977, is no exception.

José Encarnación Peña (1902-1979) Soqween was one of Dorothy Dunn’s students at the Santa Fe Indian School’s Studio in the early 1930s. He had, however, started painting earlier than this—as early as the 1920s. He continued until his death in 1979, and was most productive during the final decade of his life. His complete name was José Encarnación Peña and his Tewa name was spelled “Soqueen,” “Soqween,” and “So Kwa A Weh,” which translates to “Frost on the Mountain.”  Those who remember him in his later years recall that he was called “Enky” (pronounced “inky”). He is represented in the collections of the Laboratory of Anthropology, Santa Fe; Museum of New Mexico; Denver Art Museum; and many others.

Provenance: this San Ildefonso Pueblo Painting "Basket Dancer" by José Encarnación Peña is from the estate of the artist, passed through his widow to her grandson, the present owner.