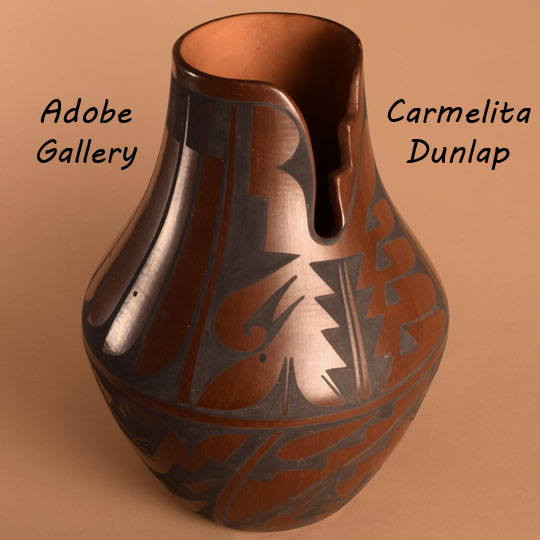 This very large jar made by Carmelita Dunlap of San Ildefonso Pueblo features a black matte design on a brown polished surface.  A potter explained to us the process of obtaining the brown finish.  When a red-slipped jar is fired in a reduction firing, the red slip turns black.  At this point, if the manure is removed from the firing, the jar attempts to return to red, but is only able to do so partway, ending up with the brown finish.  Carmelita and her son, Carlos, were experts at achieving the brown finish. Carmelita Dunlap (1925-1999) lived in California in the early 1950s while her dad worked for Walt Disney Studios.  In 1955, she moved back to San Ildefonso and began seriously focusing on pottery.  In 1974, she was one of the pueblo potters invited by former United States President and Mrs. Nixon to visit the White House.  At that time, one of her large pottery jars was displayed at the Smithsonian Institution.

Condition: very good condition with only minor scratches to the matte design

Provenance: this San Ildefonso Pueblo Large Pottery Jar with Brown Finish by Carmelita Dunlap is from the collection of a gentleman from Virginia